G8 guilty of all the good they didn’t do 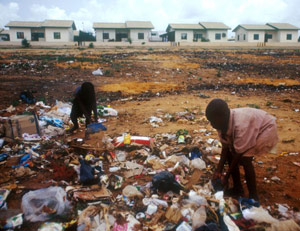 There are a billion people without access to basic needs such as clean water, health care, a daily meal or education. Many live on less than US$1 a day.

Caritas Internationalis says that the G8 leaders must use their summit in Japan to salvage their reputation on aid and help millions out of poverty.  Leaders of Canada, Italy, France, Germany, Japan, Russia, the UK and the US meet 7-9 July in Hokkaido, Japan with progress on development and climate change on the agenda.

In the case of the international community as a whole, total aid fell by 8.4% in 2007 in comparison with 2006, after a fall of 5.1% between 2005 and 2006. Aid is having an impact, but a predicted short fall of $27bn will put a potential 5 million lives at risk. The 2008 G8 is at the halfway point to the deadline for reaching the Millennium Development Goals with the anti-poverty targets way off target.

Caritas Internationalis, the umbrella organisation for 162 national Catholic charities, fears that a failure to see through previous G8 aid pledges will be compounded with more backtracking as the global economy falters.

Head of Caritas Internationalis Delegation at the UN in New York, Joseph Cornelius Donnelly, is travelling to the G8 in Japan to join Caritas Japan in campaigning for action. He said, “The G8 will be guilty of all they didn’t do on poverty if they fail to live up to past commitments. There are a billion people without access to basic needs such as clean water, health care, a daily meal or education. Many live on less than US$1 a day. Ending this scandal of poverty in a world of such wealth must be the top priority for world leaders at the Hokkaido G8.

“The tragedy is that we can show how even limited amounts of aid can make a real difference in people’s lives. Zambia has cancelled fees for basic rural health services and Burundi has introduced free medical care for mothers and children. With the global food crisis hitting the poor the hardest, now is not the time to be carrying out a pirouette on poverty when it’s needed most. In these crises, no one suffers more than the poor.

“The poor and marginalized are the most vulnerable to natural disasters caused by climate change. Over 20 million people were affected by flooding in South Asia last year, Mexico had the worst floods for 50 years, and huge swathes of Africa from the Atlantic seaboard to the Indian Ocean were under water. The danger is that inadequate resources pledged to development will be diverted to climate change. G8 that action on climate change must be extra to aid on development.”

Adaptation to help developing countries tackle climate change will cost US$50bn each year. Calculated on ability to pay, and by their historic contribution to the causes of climate change, the United States of America, the European Union, Japan, Canada and Australia should contribute over 95 percent of the finance needed.

Caritas Internationalis members including Caritas Japan have been active for years in the global campaign to persuade G8 leaders and other governments to live up to past promises to achieve the Millennium Development Goals by 2015.