Access to Medicines for Children Living with HIV: Prescription for Life 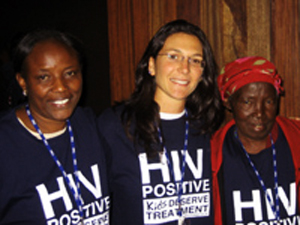 Working in Vietnam two years ago, Francesca Merico visited a family in Ho Chi Minh City where the father had died of an AIDS-related illness, the mother had HIV and the seven-year old daughter was lying desperately ill on the floor.

A priest took the child to hospital where she received antiretroviral treatment. When Merico saw the girl again in January of this year, she looked healthy and could do the things that other children did.

“The treatment gave her back her life,” said Merico, who is an international delegate for Caritas Internationalis.

According to the UNAIDS Epidemic Update, about 290,000 children under the age of 15 died of AIDS-related illnesses in 2007. Many of these children were poorly diagnosed or received no – or inadequate – treatment.

Merico says most of these deaths were preventable and for this reason the Ecumenical Advocacy Alliance (EAA) will launch a campaign in October which has been developed by Caritas Internationalis to raise awareness about the need of quick diagnosis and adequate treatment for children affected by AIDS.

“Catholic organizations in different countries started to complain that children were dying unnecessarily from AIDS-related illnesses either because they didn’t have access to enough specific medicine or they were given the wrong amount of medicine because only adult doses were available, and these would be chopped up for children,” said Merico.

She goes on to explain that poverty also played a part in these children’s deaths as families may not have had a refrigerator to keep medicines cool, or maybe could not afford the food which was vital to ensuring that people receiving ARVs are well-nourished.

“The EEA is taking the opportunity here at the AIDS conference to talk to pharmaceutical companies and encourage them to develop new AIDS medicines so that they are adapted to children in poor settings and to babies too,” said Merico.

Merico goes on to say that early diagnosis is essential among babies and children as the disease moves faster in a young body. But at the moment, lack of research means that diagnosis of children under 18 months can be problematic.

The EEA campaign will mobilize children between 11 and 16 to write letters to governments, pharmaceutical firms and media outlets to make them aware of the hundreds of thousands of young lives that are lost needlessly and encourage action.

“The fourth Millennium Development Goal aims to reduce child mortality. We won’t be able to do this if these children don’t have access to the medicines they need,” said Merico.

The campaign closes in November 2009 – the 20th anniversary of the UN’s Convention on the Rights of the Child, which recognizes a child’s right to attain the highest attainable standard of health.

Merico says that she hopes that children across the world will join the EEA campaign and take on the challenge to ensure this happens.