Imagine globalisation based on solidarity: View from the summit 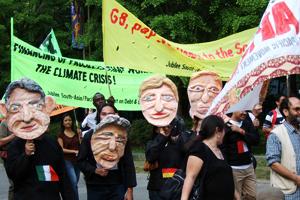 Imagine globalisation based on solidarity: View from the summit

In January, Caritas Internationalis Secretary-General Lesley-Anne Knight found common ground at the World Economic Forum in Davos as business and political leaders highlighted the importance of faith-based organisations in achieving the MDGs.

In April, Pope Benedict XVI visited the UN in New York. “Questions of security, development goals, reduction of local and global inequalities, protection of the environment, of resources and of the climate, require all international leaders to act jointly and to show a readiness to work in good faith, respecting the law, and promoting solidarity with the weakest regions of the planet,” he said.

Cardinal Rodríguez wrote to G8 countries Canada, France, Germany, Italy, Japan, Russia, the UK, and the United States: “There is now a real danger that the Millennium Development Goals will be remembered as empty words. This can only fuel the cynicism with which so many people in developing countries already regard rich countries’ expressions of concern,” he said.

Leaders of G8 countries met from 7–9 July in Hokkaido, Japan. Caritas members around the world urged their supporters to take action through an email campaign and by sending postcards to the government of Japan.

On the first day of the Summit, over one million messages demanding the G8 honour their promises to tackle poverty were handed to summit host, Prime Minister Fukuda of Japan. Caritas Japan gave 80,000 protest postcards to its supporters.

Caritas representative at the G8, Joseph Donnelly said, “The outcomes of the 2008 G8 were a stalemate on climate change and a broken record on aid for Africa. The world was looking for fresh leadership, but instead got Groundhog Day.”

In Accra, Ghana, Caritas members from the Democratic Republic of Congo, Togo, Uganda, Ireland, England and Wales, and the Netherlands joined African Churches and faith-based organisations at an aid effectiveness summit, calling for greater involvement of civil society in deciding how aid is spent.

The pressure paid off. Blandine Bouniol, Caritas Internationalis Policy Analyst, blogging from Accra, said, “The role of civil society as independent development actors in their own right and of parliaments was recognised throughout.”

In September, Cardinal Rodríguez brought to world leaders a message from the poor, calling for renewed action on the Millennium Development Goals. The Cardinal was among a select group of civil society representatives invited to speak at the United Nations High-level Event on the MDGs in New York.

And at the end of the year, Caritas Internationalis Representative Michel Roy headed to Doha for a Financing for Development Summit. It ended without a concrete commitment to action.

“A mother dies every minute in childbirth. A child dies every three seconds. This could be prevented with an additional US $10 billion a year. The poor can’t wait any longer for action,” he said.