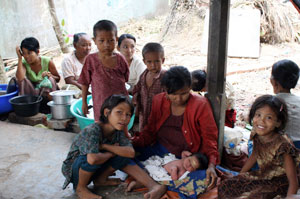 Very few victims of Cyclone Nargis have received enough help to get them through until the next harvest.
Credits: Caritas

Cyclone Nargis hit the Ayeyarwady Delta region of Myanmar (also known as Burma) on 2 May 2008, causing death and destruction beyond anything experienced there before.

Caritas Internationalis is appealing for US $ 3,473,383.00 (€ 2,480,978.00) to support the efforts of the people of the Ayeyarwady Delta to recover fully from the devastation and to be better able to cope with disasters in the future.

The assessments of the international relief operation have been mixed, but the disease and starvation anticipated by some relief agencies have been avoided.

The international response was curtailed by government restrictions on international personnel entering the country and accessing the affected areas. This partly explains the deficit in international government pledges, totalling little more than 40% of the UN target of US $481.8 million.

The initial emergency response mounted by the Church was immediate, with significant support from Caritas Internationalis. It made use of existing Church structures and over 340 local volunteers to deliver desperately needed food aid to over 26,000 people within weeks of the disaster. Temporary shelter followed, along with medical services, clean water and restarting livelihoods.

The new Caritas appeal aims to work in at least 95 villages in Ayeyarwady, reaching at least 14,000 people directly and 45,000 indirectly. Many of these remote communities were overlooked by other agencies during the relief phase. Beneficiaries includes landless and small land-holders, children of poor families, and women, particularly women-headed households.

The project will support:

The appeal will support Church partners so they will be able to respond to future emergencies.