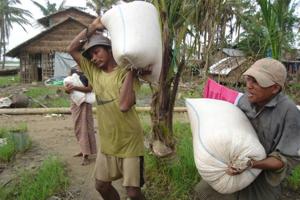 Caritas staff and volunteers distribute rice to those in the most need
Credits: Caritas

Saturday, 2 August 2008 marks the three month anniversary of cyclone Nargis. And despite the difficulties, Caritas’ immediate response, through the Church and other partners in Myanmar, has saved many lives and brought urgent relief to 82,700 children, women and men.

Mr Jamie Isbister, adviser to the Caritas response in Myanmar said: “Despite the immense difficulties in accessing the affected areas, in working in Myanmar and in harnessing and training people on the ground to assist the recovery efforts, we have exceeded our initial targets in reaching affected populations. At least 82,700 people have been directly assisted with supplies of food, clean water, temporary shelter and other essential items. We have striven – and succeeded – in responding in a manner true to the Caritas spirit of respecting people’s dignity at this horrendous time.”

Through local partners, particularly the Catholic Church and other networks, Caritas has established the necessary systems of accountability for our donors and for those who have received our assistance in Myanmar, ensuring we have the capacity on the ground to be able to deliver our programme.

“This has been an enormous challenge,” says Mr Isbister, “but we are very sure that we are responding in a manner that is sustainable, and more importantly in a manner that has nurtured people’s ability to be able to begin to rebuild their shattered lives.”

Volunteer spirit of the Church and supporters

To date, more than 340 volunteers are being utilized across the affected area of the Irrawaddy Delta, working in assessment and distribution right through to monitoring and evaluation of the relief and recovery efforts.

The volunteers assisting Caritas partners in delivering aid have been recruited from parishes and communities in which the Church operates in Pathein, Aima, Pyapon, Dedeye and Yangon. Mr Isbister reports that “…systems have been established by Caritas partners whereby volunteers can undertake on-the-job training and are involved in providing material assistance, transport and accommodation, and where necessary after-care in the form of trauma counselling.”

Efficient collaboration across the Catholic dioceses of Yangon, Mawlamyine and Pathein has been crucial to the success of the response so far. The program has also benefited from the support of the staff and volunteers from dioceses as far away as Hakha in Sagaing Division, Chin State, Mandalay and Kentung.

Mr Isbister also explained that “…using local staff increases our geographic mobility and our ability to provide effective assistance. Local church representatives enjoy a high level of trust among the affected population: they speak the local languages and dialects, have an intimate knowledge and thorough understanding of the fabric of local society, and are familiar with the social and economic environment in which they operate. Local Churches are simply part of the community, which greatly strengthens our response. The acceptance and trust that local staff generally enjoy among the beneficiary communities allows for these communities to be better included in the design and implementation of assistance programmes. The importance of this is that it ensures, at a later date, greater ownership of the recovery process by these communities.”

Focus on those in most desperate need

Difficulties of access for international staff have certainly complicated the problems of coordinating a response. The Caritas philosophy is to use local partners and build local capacity; in Myanmar we have relied heavily on this model. In the long term, this will leave the people of the Delta with much greater skills and capacity to manage such situations should such a major cyclone disaster should occur again.

Mr Isbister also noted that “…despite the fact the MDRC is working through Church structures, this has not restricted or limited the response. It is very clear from Yangon’s Archbishop, Charles Bo, that the MDRC and Caritas response focuses not on religion but on our mandate to support those in the most desperate need. The MDRC program being supported by Caritas takes a clear stand that it targets people on the basis of need and the basis of their vulnerability to threats to their life, dignity, health and livelihoods.”

Myanmar is a country of enormous cultural, ethnic, and religious diversity. Its population of 51.5 million consists of more than 135 national groups speaking over 100 languages and dialects. The population is 90 percent Buddhist, and the remainder are Christian, Muslim, Hindu and Animist. Among the affected population there are Mon, Burmans, Karen, Kayin and several other ethnic groups.

The overwhelming majority of the population in the stricken areas are Buddhist; in this area adjacent to the Bay of Bengal there is also a substantial number of Muslims.

Mr Isbister explains: “The humanitarian imperative has no place for discriminating between people of different religions, and to do so would go against any and all international standards, including the Caritas principles guiding an emergency response. The Church has the capacity, the moral responsibility and the very explicit desire to build bridges between religious and ethnic groups, and thus to contribute to greater harmony, dignity and respect in an otherwise divided country.”

The Church has also been able to establish interfaith collaboration and is working effectively with the local faith based and cultural groups including the Buddhist monks, Muslims and the ethnic minority groups.

Responding through local partners is vital. Local knowledge helps get aid to the people who need it most. But the scale of Cyclone Nargis risked overwhelming our local Church partners, so it was important to get international technical experts to offer them support. Caritas has located its international support office in Bangkok and from there is providing the local team with practical assistance in areas of planning, implementation, monitoring and reporting.

“This is a unique situation, with many of the experienced resources we would expect in an emergency of this scale not on the ground. The difficult operating environment in Myanmar means we have had to reorganize our response to something that is appropriate. However, we are confident that with this support from Bangkok, international standards will continue to be met,” said Mr Isbister.

“We are proud of what we have achieved, and can reassure our supporters around the world that their support through us is making a huge impact on rebuilding lives, even though we still must overcome the challenge of providing assistance to many people who still do not get enough.”

To date, more than 255,000 kg of rice have been distributed by Caritas partners in the Cylcone Nargis response in addition to other traditional foods such as fish paste, cooking oil, chilli, beans, potatoes and other staples.

Caritas’ local partners are procuring all shelter materials locally, including goods for shelter kits. Repair work to rebuild homes is using locally procured traditional materials such as thatch and bamboo is under way in several of the affected areas. This response reflects the requests of affected communities, who prefer to rebuild their homes with thatch and bamboo.

MDRC, supported by Caritas, has focused water and sanitation work on cleaning lagoons by pumping out salty or contaminated water and cleaning out contaminated lagoons. In some instances, lagoons have been chlorinated. In most cases, communities have been provided with “water guard” to add to 20 litre cans of water. Rain water collection is being promoted: three rain-harvesting systems have been established in three villages. As of 15 June 2008, water and sanitation assistance has been given to 8,096 beneficiaries from 39 villages.

Supported by Caritas, two roving medical teams of local doctors and nurses have been trained. They are working in eight villages in Pathein and Yangon, providing medical care, public-health care such as immunization programmes, cleaning of wells and ponds and prevention of food-borne and water-borne diseases. The medical staff give health education in community meetings and at camps. Training in the construction of fly-proof and disease-proof latrines has commenced.

Psycho-social programmes are being developed for survivors and staff members. Working with local partners, church leaders and UNICEF, 17 child-friendly spaces have been instigated throughout Pyapon district.

Much of the rice paddy was affected by the influx of seawater from the tidal surges, and much of the livestock was lost. This is a major focus for the next phase of the project: 30 power tillers for readying the rice paddy for production have been purchased with Caritas support in Pathein on a cash-for-work basis. Seeds and seedlings have been distributed across the affected areas to ensure that the rice paddy can be planted in time for the next growing season.

Partners are now procuring fuel, tools, additional tillers and seeds. Caritas partners are also mobilizing communities to carry out the tilling job as a cash-for-work initiative. As survivors return to their villages, livelihood recovery is becoming imperative, particularly as the monsoon rice crop must be planted by the end of July.

Next phase of the response

Planning has commenced for the cyclone Nargis emergency response to move into the recovery phase, starting after mid-October. The Caritas programme continues to expand relief activities such as targeted food distribution, distribution of non-food items, shelter and housing, water, sanitation, child protection and trauma care.

The recovery phase from mid-October is also likely to include a focus on agricultural rehabilitation, livelihood recovery, loan and credit facilities schemes to support small businesses, desalination of land and other mechanisms to address saline intrusion on productive land, distribution of seeds, seedlings and agricultural tools, boats and nets for the fishery sector, replacement livestock and livestock fodder and health treatment for surviving animals.

The recovery and rehabilitation phase is being finalised in consultation with partners and beneficiaries. At present, Caritas is programming activities in this recovery phase for up to 18 months.

The main challenge for the Caritas programme is to ensure maximum expansion of the response in the face of the massive scale of this disaster. With approximately 140,000 people dead or missing, 2.4 million people affected and about 1 million still in need of priority assistance, the needs in Myanmar are still enormous.

Mr Isbister says “…we know the Caritas-supported relief efforts are having a great impact on those whom we are able to reach, but the need is still enormous. With more support we can do much more and greatly extend our efforts in Myanmar.”

The people of Australia has been most generous, donating US$1.6 million so far for those affected by cyclone Nargis. Caritas Internationalis has launched an appeal for US$8.2 million, which we are supporting. But currently only just over half that figure has been donated. We urgently need more support so that Caritas can expand its programme to reach those still in desperate need.

Impact on women and girls most severe

Cyclone Nargis affected one third of the 7.3 million people in the impacted area, but it had a disproportionate effect on the lives of women and girls, who were less able to swim or escape the tidal surges and winds. Of those killed by the cyclone, 61 percent were women and girls, as stated in the Post-Nargis Joint Assessment released by the tripartite group set up to respond to the humanitarian crisis in Mynamar. “In some severely affected villages, twice as many women aged 18-60 died as men,’’ the report noted.

Children under 12 were also seriously affected: there was a noticeably higher number of young girls who died when Nargis struck than young boys.

Caritas’ response in Myanmar through local partners will include a focus on child protection and will promote education, particularly for girls and young women.