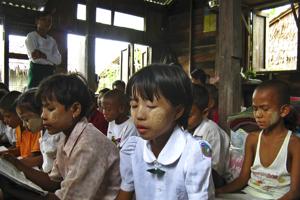 Caritas says that 80,000 people have received some form of assistance through its relief operations following the deadly cyclone that hit Myanmar 2-3 May, 2008.

Caritas Internationalis is coordinating relief efforts of its 162 member organisations. Caritas has reached survivors of the storm in Yangon, Pathein, Bogale, Amar and Dedaya with food, clothing, bedding, and provided access to clean water and sanitation.

At least 5000 people have received 50kg bags or rice and 8,500 mosquito nets have been been handed out among other items.

“With the ensured the support of all of you, we are resolute in making the lives of the people more dignified through greater livelihood options, decent living quarters and charting a hopeful future for their children,” said Archbishop Charles Bo of Yangon.

“To each one of you who contributed in making it happen, it’s a sweet debt we owe to all of you.”

Problems still exist accessing some areas that remain largely cut off due to extensive damage to the roads and bridges and keeping track of people who have abandoned their villages in search of help.

But 85 percent of those targeted by Caritas with building materials have been reached with nearly 10,000 people having been provided with temporary shelter

Caritas has cleaned lagoons by pumping out contaminated water, mucking out the lagoons, and then collecting rainwater.  In some instances, lagoons have been chlorinated. In most instances, however, communities have been provided “water guard” to purify their drinking water.

Caritas has staffed and trained to medical teams to provide medical care in eight villages to provide health care such as child immunization and provide education on avoiding disease.