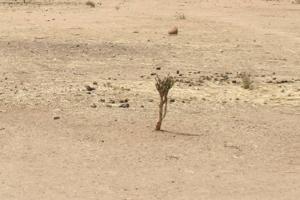 Half the land in India is now desertified

In recent times, the loss of vegetation in the area has vastly degraded their once fertile land, and water has become a rare commodity. Since 1999, the failure of the monsoon has adversely affected the soil and the land has become barren. In order to regenerate it, ravines and ridges were treated by constructing gully plugs and digging out contour trenches. Earth check dams with spillways on either side were built to allow the water overflow to run off without damaging the dams.  Ponds were also constructed to hold larger volumes of water.

As farmers witnessed the effects of lack of water and soil erosion and its detrimental impact on agricultural production and yields, the concept of watershed management gained credence amongst them. Many are convinced that the local environment can be regenerated through a well-managed watershed programme.

Many now understand the fact that as the groundwater increases, normal farming patterns and agricultural output levels can be maintained despite changing weather conditions. The community has now learned to conserve their water and soil. Not a single drop of water runs off in their village.

As the human and animal population increases, these stresses will become greater and the demand on natural resources will increase leading to permanent loss of vegetation and plant species. This may also lead to the conversion of large areas into wastelands and to the frequent occurrence of natural disasters.

Half the land in India is now affected by desertification and this impairs the ability of land to support life. It is particularly devastating because of its self-reinforcing nature.

The causes of desertification are extensive cultivation of one crop, use of chemical fertilisers and pesticides, shifting cultivation without adequate period of recovery, industrial and mining activities, overgrazing, logging and illegal felling, forest fires and unsustainable water management.

Desertification is a global phenomenon of land degradation, which reduces the natural potential of the ecosystems and has a direct impact on people in terms of vulnerability to food shortages and natural disasters, depletion of natural resources and deterioration of the environment.

Vegetation plays an essential role in protecting the soil, especially trees and shrubs, because their long life and capacity to develop powerful root systems assure protection against soil erosion. Their disappearance can considerably increase the vulnerability of the land to turn into a wasteland.