Imagine a world for tomorrow’s generation: A view from Poznan and India 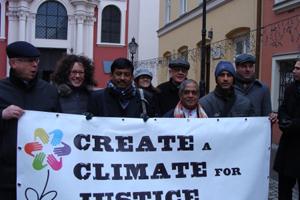 Imagine a world for tomorrow’s generation: A view from Poznan and India

A view from Poznan

Grow Climate Justice Campaign was launched on 7 December in Poznan. “People in countries such as Bangladesh are totally dependent on the weather,” Bishop Theotonius Gomes C.S.C, Bishop of Dhaka and President of Caritas Bangladesh said at the launch.

“Our agriculture, and hence our whole culture, is based on water from the rains and rivers. Changed rainfall patterns, harsher storms and longer droughts are already costing lives and livelihoods,” he said. “We have seen a rapid increase in the need for relief efforts. Within the next 10 years there will be 200 million climate refugees, of which 25 percent, 50 million, could be from Bangladesh.”

A mass was held in Fara Church in the Old Market Centre. Children from the local parish brought up offerings to the altar, which included a plant, some soil and water to symbolize the elements of the Earth.

In the end, the conference in Poznan saw another set of climate talks slip by with no new deal on global warming. Although Caritas never expected a significant breakthrough, we were hoping for more ambition and urgency.

Poznan is the starting point for a global deal to be settled in Copenhagen at the end of 2009. Much work needs to be done if we are to get the deal that millions of people want to ensure a future for their children and cope with the devastating impact of climate change. 18

A view from India

From over 30 countries, environment scientists, development professionals, academics, government officials, and UN representatives took on the issue at the International Conference on Climate Change, part-organised by Caritas India from 3 to 4 September in New Delhi.

“We all are agents of change. Awareness, knowledge and goodwill if combined together can facilitate the process of reduction in the extent and impacts of climate change,” said Fr. Varghese Mattamana, Executive Director of Caritas India. Caritas India used the conference to launch its ‘plant a tree’ campaign.

“Planting a tree and nurturing it till it grows could be considered as a cheap and very effective way of reducing the impact of climate change,” said Rev. Peter Remigius, Chairman of Caritas India, urging each participant of the conference to plant a tree.