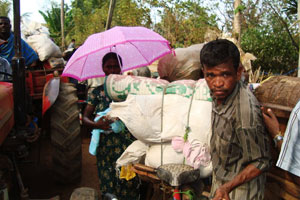 Close to a quarter of a million men, women and children have arrived in camps in the north of Sri Lanka. They’ve fled months of heavy fighting between government and rebel forces, endured a lack of food and medicine, and witnessed unimaginable suffering.

Caritas is one of the few international aid agencies with access into the camps, where its staff provide hot meals, medical assistance, and counseling. These are stories of ordinary people now living in the camps. All names have been changed to protect identities.

“I lived a fairly comfortable life in Puthukkudiyiruppu (PTK),” said Ganeshan, a 62 year-old farmer. Ganeshan lived with his family on ten acres of paddy and four of coconut. “My farm income was more than enough to meet my family needs,” he said.

“The fighting came closer and closer to our house and in January our house was damaged by shell fire…there was no way we could have stayed there any longer, ” he said.

Finally, he along with his wife, mother and 4 other siblings managed to cross to Mathalan in the first week of April and to the Ananda Coomaraswamy Transit Relief Village (ACTRV) in the third week of April.

His mother Sellammah is 84 years old and his feeble with a bent posture. She finds it difficult to move about and has to be carried to the toilet which is about 25 meters from her room. A fairly prosperous family has now been reduced to penury.

“Yes we are grateful to Caritas Mannar for the food they are giving us. I don’t know what we would have done if not for their assistance. But I am a farmer who never dreamt that I will have to depend on anybody for my food” he said.

Ms. Gowrie Subramaniam, 36, lives in the Arunachchalam Transit Relief Village along with her mother. She had to leave her home in Killinochchi in January due to the fighting. On the run with her parents and 3 other siblings, she reached PTK in February. But tragedy struck there when a shell injured her and her right leg was amputated.

She was able to leave Mathalan in the third week of April and reach the Chettikulam camp on the 24 April along with her mother. Her father and three other siblings are stranded on the shores of Mathalan awaiting the opportunity to leave the area. Caritas Mannar has come to her rescue. They initially provided her with a wheelchair and have now fitted her with an artificial leg.

“I have suffered enormously and still do. I miss my father and sister and brothers who are stranded in Mathalan” she said.

“My mother is old and feeble. She can only do so much for me. Caritas has helped me a great deal. At least I’ll be able to move about on my own once I get used to wearing the artificial limb.”

Wimalaraj, 34, lived with her husband and child in Periyapandivirichchan in the Mannar district. When the Sri Lankan Army attacked the then rebel held territory, her family fled to to Killinochchi and after many moves they reached Mathalan in March.

Tragedy struck when Killinochchi came under artillery bombardment and she lost her right leg. She was fitted with an artificial limb by the Venn Pura organization. While in Mathalan, shelling killed her father-in-law and her sister.

She reached the government held territory along with her husband, child and sick mother in Chettikulam in April. Her sick mother was treated at the Mannar hospital and is now at the Kathirgamar Welfare Village camp.

“I am separated from my mother, I have lost my sister and father in law” she said. “But I hope my mother can join us soon.”

Wimalaraj was fitted with another artificial leg thanks to Caritas Mannar as the one fitted earlier was not comfortable.

“At least I won’t be a burden on others if I am able to walk on my own,” she said.

Born in Puthukkudiyiruppu in 1985, Ponjab, 24, worked as a carpenter and earned a good income. He also worked for various institutions such as Oxfam in the aftermath of the tsunami disaster and earned a good income. Married with one child, he lives with an extended family of 8 others including his in laws.He had his own house and was well set in life until the conflict caught up with him.

“In March, shell fire destroyed a portion of our house. It was no longer safe to stay there” said Ponjab. They came to the coast of Mathalan in April and lived on the shore for three weeks until his family’s arrival to the Ananda Coomaraswamy Village camp on 26 April.

The extended family of 9 lives in a tent provided by UNICEF. It’s about 15ft by 8ft and made of tarpaulin sheet. Ponjab complains that due to the very hot weather they live under the shade of trees in the afternoons. When there is rain the tent is flooded as well.

Water facilities for bathing have not been provided for this block of inmates. They bath in the nearby stream which is dirty.

“I don’t know what sins I have committed to undergo this ordeal. I lived a comfortable existence with my family at home. I hope they let us go back to our home as soon as possible.” he said.

“I thank Caritas Mannar for all the assistance they are providing me and my family. I have heard that in the other camps the situation is not as good as here. But I want to go home as soon as possible “ he said.