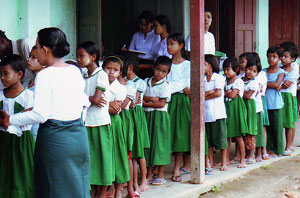 One year after, although the most immediate needs are being addressed, many tens of thousands of people still require ongoing assistance.

One year on from Cylcone Nargis which took the lives of more than 140,000people and left more than two million people without homes, the Caritas network continues to bring dignity to those affected.

Caritas has supplied over 100,000 people with basic food staples, around 40,000 people with non food items such as blankets and mosquito nets and thousands of other families with household hygiene and sanitation kits.

Yangon’s Archbishop Charles Bo, leading the local response, says the Church’s greatest achievement has been its ability to provide support to the most vulnerable people affected by the cyclone.

“Our intervention is targeted to the villages and places neglected by others. Our flexibility has been our strength.”

Archbishop Bo, thanked the world and particularly the Catholic community who have given so generously to support the people of Myanmar (Burma) in their moment of need but impelled them not to forget those affected over the following years it will take to build back what has been lost.

“We have recovered from sadness, confusion and helplessness to joy, charity and hope due to Caritas Internationalis presence,” he said.

“Much remains to be done to revive life in the Cyclone affected delta area.The Church will continue its life saving work for as long as necessary,encouraged by the support of the Caritas Internationalis family.”

Caritas Australia was the facilitating partner for the Caritas confederation.

Rosemary Pikko, Emergencies Coordinator of the National Karuna Office (the localCaritas) says that while the most immediate needs are being addressed, many tens of thousands of people still require ongoing assistance.

“Some people are now still living under tarpaulins and many are struggling to rebuild their livelihoods,” she said.

The scale of the disaster, ongoing difficulties with access to the affected areas, compounded by the shortage of food (due to loss of agriculturalproduction in the rice bowl of the Delta) is affecting more than 5 million people across the country, indicating that although much has been achieved, the work is only beginning.

In the delta, more than 50% of affected farming families do not have the productive assets they had before the cyclone (livestock, seed-stock, home gardens and access to arable land) and up to 75% of fisher-folk are yet to replace lost boats and nets. Many families still live in make-shift shelters,and will once again be exposed to the wind and rain this coming rainy season.

The current phase of the Caritas-supported Nargis response is focused on increasing the output of small-scale farming anddeveloping small businesses and micro- enterprises through promoting revolving agricultural loans, rice seed banks and cattle banks,improving markets and market access and the development of cooperatives.

Caritas is also focusing on supporting disaster prevention and preparedness programs in villages and building the capacity of the local network to prepare for future disasters.

Through its work Caritas is bringing hope and dignity to those still suffering the consequences of the cyclone.

“Now when I meet affected people many of them are able to stand by themselves,” Rosemary said.

“The villagers have told us that they have more family spirit for their communities than before, they don’t just think of their own family but try to help each other.”

Caritas, with its extensive web of volunteers and supporters throughout the country is well placed to continue its life saving work but more resources are urgently needed tosupport this network.

Archbishop Bo said “To all of you who stood with our people, our hearts express a deep sense of gratitude.”