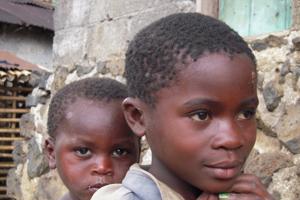 Even children aren’t safe from the widespread sexual violence in east Congo’s conflict. (Photos do not imply that the children depicted are the victims of sexual violence)
Credits: Caritas/Peter Risholm

Some of the rape victims who are brought to Caritas Congo are as old as 70. One of the youngest to require help was just three months old.

“Some of the women who come to us are so badly damaged by the rape that they can no longer walk,” says Ange Mbala, a psychologist for Caritas Congo in Goma.

Caritas Congo has counsellors who work in communities and are able to identify women and children who have been abused. The stigma attached to a sexual attack means that women may be reluctant to come forward and seek medical help.

Type the words “Congo” and “rape” into a internet news search engine, and the number of stories seem endless. This week one report said that a three-year-old girl in eastern Congo died from horrific injuries after being raped by a rebel. Reports describe rape being used “as a weapon of war”.

“It’s about destroying communities,” says Ms Mbala. “It’s not just the victims’ lives that are torn apart, but also those of their families and of the communities around them.”

Both soldiers and rebels have been accused of raping the women and children in eastern Congo’s conflict. Apart from the physical and psychological damage that rape brings, there is also a grave risk of unwanted pregnancy and HIV infection

“Women from certain communities are targeted, just to humiliate those communities, to destroy them and to occupy their land,” says Fr Pierre Cibambo, Caritas Internationalis’ Africa advocacy coordinator. “Through this strategy, the rebels are controlling and exploiting mineral resources in vast zones of the Kivu. Some soldiers are also responsible for rape and sexual violence. I think that this has something to do with the chaotic integration of former militias in the regular army.”

“Women may try and take care of themselves in their villages,” says Ms Mbala, “but there often isn’t a healthcare system or any professionals to treat them.”

Once the victims of sexual violence have been found, Caritas takes them for hospital treatment. Caritas trains aid workers in awareness raising about sexual violence and AIDS and informs them about laws protecting against rape. It also offers training to doctors in how to treat rape victims on a physical and psychological level.

Caritas works to help women reintegrate after the violence. It provides training in things such as sewing so they can have a marketable skill. Caritas provides material support in the form of food, clothes, hygiene items to women who become pregnant as a result of a rape.

“Through their programmes, Caritas and the Church continue to promote dialogue, peace and reconciliation in communities,” says Fr Cibambo. “Caritas is engaged in demobilisation and reinsertion programmes, especially for child soldiers. We also raise awareness among communities and young people in particular about promoting peace.”