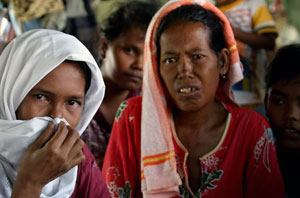 With most of the rebuilding work finished, helping people to be better prepared in the disaster-prone region is the next focus.
Credits: Caritas

An earthquake in the Indian Ocean on 26 December 2004 triggered a tsunami that devastated the coasts of Indonesia, Thailand, India and Sri Lanka Some 300,000 people were killed in a matter of hours.

The money was used to provide immediate relief, then on building homes, restoring livelihoods, and rebuilding lives in a sustainable way.

Caritas says that with most of this work finished, helping people to be better prepared in the disaster-prone region is the next focus.

In Thailand, the killer waves razed tourist resorts to the ground and moved up to two kilometres inland, destroying villages, roads and schools in their path. The thousands of people affected were left with no means to earn a living.

Four years later, travelling around the coastal towns in Phuket and Takuapa, there are no signs of the destruction. The rest of the world reacted swiftly to the emergency and the Thai government was quick to rebuild the infrastructure that had been destroyed.

Where before there was only mud and debris, there are now brand new houses and hotels.

The numerous posters that show the evacuation routes towards high ground in the event of another earthquake are the only signs reminding visitors that there was a tragedy here not long ago.

Experts think that an earthquake like that of 2004 may not hit this region again for another hundred or two hundred years.

But we should not forget that in the 20th century there were 25 tsunamis in different parts of the world. In the fishing village of Tungla Ong, like in many others, people seem to think that it is better to be safe than sorry.

Every few months they organise informative sessions on how to react quickly in the event of a new giant wave hitting unexpectedly.

A few days ago, we visited them, accompanied by Father Suwat, director of Caritas in the diocese of Surathami, and were received by the 30 people who attend the catastrophe prevention workshop. Monitors show detailed maps signalling the evacuation routes to reach safety quickly.

One of the participants, Mr. Sanu Lom, aged 34, recalls that during the disaster four people from Tungla Ong were killed. His house and fishing boat were destroyed by the waves that were more than 30 metres high. He now has a new job in a rubber plantation.

He says he is less worried now because he knows perfectly well what to do in the event of another emergency.

Father Suwat explains that three months ago Caritas Thailand began offering these courses, which include evacuation drills. They have been organised in five coastal towns and in all of them the people take a huge interest in participating.

However, it is not all about how to react in the event of a natural disaster that might last just a few hours. A life without a means to earn a living can be an even bigger disaster, and one that should also be prevented. The village of Tungla Ong is home to one of the 14 savings groups that Caritas has organised in the region. They meet once a month.

Once the drill is over, we find 69 people who are bringing their accounts up to date. Each member of the group must save 100 baths per month (20 euro cents). Thanks to these savings and the micro-credits managed by a committee, many people who lost everything during have been able to set up shops, family vegetable gardens and fishing businesses.

“A bank would never grant a loan to people like us who have no property as collateral”, explains Mr. Sanu Lom.

Almost half of the 60 members of this savings group are women. They tend to attend the meetings more regularly than the men. “In our Thai tradition, it is the woman who looks after the money at home and manages it”, says Father Suwat.

Several kilometres inland we visited one of the families who have benefited from this lending and savings programme. Mrs. Lamyai, aged 67, and her husband Mr. Sewal, aged 50, live on the edge of a dirt track in the middle of a thick forest.

In their shop, Lamyai and Sewal sell oil, biscuits, clothes, batteries, soap and many other products. They opened it two years ago with a 10,000-bath loan from their group supported by Caritas. They have already paid off almost half. They are clearly satisfied and proud to be able to earn a living.

Two thousand kilometres to the West, on the coast of Indian state of Tamil Nadu, where the tsunami killed 9,000 people, Caritas India (with the support of various other Caritas bodies) has built 950 homes in coastal areas in the last two years.

Some 140,000 fisherman are estimated to have lost their means of earning a living. In the coastal village of Muttom Boat, we visited some boatyards launched by the Kottar diocese in 1990. They make boats to help fishermen’s families. When we visited we found 20 workers, hammer and gouge in hand, finishing three handsome 10-metre vessels.

The foreman, Mr. Raj, explains that after the tsunami the fishing stocks diminished, as though the tuna, sardines and squid had not yet got over the shock and had moved far away. In view of this new situation, the fishermen are forced to venture further out to sea and spend three or four nights there. They therefore need more suitable boats, that are sufficiently stable, and suitable for fishing grounds and disembarking on sand beaches.

Each boat costs 100,000 rupees (around 2,500 euros) and are usually purchased in instalments, by groups of two or three fishermen. With a culture of saving and loans which is deeply rooted in India, many have already benefited from this programme run by Caritas India in the last few years.