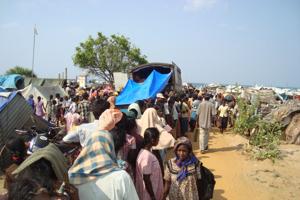 100,000 people have fleed the warzone in Sri Lanka
Credits: Caritas

Among the many things that people may lose in a war, such as their homes and clothes, there’s also the chance that family members will disappear into the chaos.

Tens of thousands of people have been cornered into a rebel-held small strip of land by fighting in northern Sri Lanka.

Even though almost 190,000 have managed to escape into safer zones, the sheer numbers and logistical difficulties present a serious challenge to families trying to stay together.

“People initially go into transit camps,” says Fr Damien Fernando. Director of Caritas Sri Lanka. “But sometimes they get separated from their families in the course of the transfer from these camps to the longer-term welfare camps.”

Caritas has lobbied government officials to focus on the reunification of families and has set up meeting points in camps for families. Fr Fernando says up to 1,300 have been reunited so far.

Caritas has also focused on helping elderly people, who may struggle to be independent, go and live with their relatives

The turmoil caused by the conflict has caused enormous trauma among the people in the region, says Fr Fernando. Caritas provides psycho-social support in camps, as well as offering spiritual help.

“I’ve visited some of the camps and people need a lot of healing,” says Fr Fernando. “We belong to the team from the Mental Health Department and we have representatives who go into the camps and work on this level.”

For those who have lost contact with their family and support network, and thus the possibility of an outlet for their anguish, this type of help is essential.

Fr Fernando says that looking to the future, the work of Caritas must focus not just on the provision of aid and the physical reunification of families, but also on bringing together and building confidence between the Tamils and Sinhalese.

He says there is a lot of suspicion between the two groups. Even before this recent development in the conflict, Caritas Sri Lanka was actively promoting peace between them.

“We’ve helped develop peacebuilding measures so that integration and living together can be made possible,” says Fr Fernando. “We’re thinking of promoting ‘peace villages’ where people can come together.”

In the meantime, he says that lots of Sinhalese in the south of the island have been sending food and money to help the Tamil victims of the conflict in the north.

While war may destroy some families, it also gives others the opportunity to treat strangers as their brother.