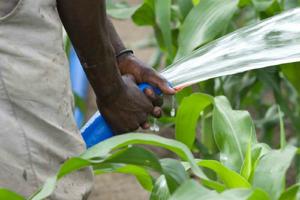 Hundreds of thousands of rickshaw drivers in Bangladesh survive on just a few dollars a day. Previously, they struggle to get by, but with prices for staple foods such as rice increasing by 45 percent  in one year according to the National Consumers’ Association, that struggle has become a battle for survival.

Caritas Germany in a report “Full Tanks, Empty Plates” says that food imports worldwide have risen 90 percent since 2000 and this has been caused by an increased demand for biofuels.

Almost everything we eat can be transformed into fuel. With oil prices at an all time high, turning farms into producers of biofuels has become more attractive. The European Union (EU) and the United States are promoting this development in order to reduce their dependency on crude oil and natural gas.

The EU wants to raise the quota of biofuels by 10 percent by 2020. In the United States, the production of ethanol will increase by 600 percent over the next ten years thanks in part to a government subsidy of US$0.51 per gallon.

The production of biofuels in the EU is highly inefficient. The entire area reserved for biofuels took up 3 percent of the all farmland in 2006, but covered 1.2 percent of the EU’s fuel needs.

The result is somewhat better nearer the equator. This is especially true for sugar cane and palm oil which provide a much higher return per hectare than rapeseed or corn.

In food-insecure Ethiopia, the Government is considering an acreage of 17.2 million hectares – 6.5 percent of the country’s territory – as suitable for the cultivation of energy plants. Contracts for almost 200,000 hectares have already been concluded and a further 900,000 are being negotiated.

The farmers receive compensation, dependent on crop yield, which corresponds to their prior income, but this is too little to live on. In return they relinquish their nutritional independence for they are no longer able to feed themselves from their own resources.

Companies are making huge profits. The hectare yields are about six times that for which the farmers are paid. Meanwhile, the poor are losing their farms, unable to afford the lease interest for the increased value of their land.

Economists predict that the number of food-insecure people in the world would rise by over 16 million for every percentage increase in the real prices of staple foods. That means that 1.2 billion people could be chronically hungry by 2025.

Caritas Germany says the production of biofuels poses risks to food security, social justice, biodiversity and the world climate, while not even compensating for the slow decline of gasoline to fill our tanks.

Caritas Germany says that cutting the use of motor vehicles is necessary although this will have consequences for our lifestyle.