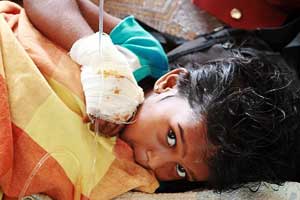 Caritas says innocent civilians are dying in Sri Lanka due to indiscriminate bombing by both the army and rebels with thousands more wounded and suffering.

Caritas says the country is facing a humanitarian crisis with at least 250,000 people trapped in the conflict zone in Vanni in the northeast as government forces battle Tamil rebels (LTTE).

In a statement, Caritas Sri Lanka said the violence is reaching its peak and the chances for a political solution are fading. It says civilians do not have access to security, with safe havens for people who have been forced from their homes providing inadequate protection.

Caritas Sri Lanka says camps for screening people who have fled the violence also are perceived to be unsafe and is calling for greater transparency in how the camps are run.

Caritas Sri Lanka said that people including women, children and the elderly have been forced to flee for the 10 or 12 times from the fighting.

The statement said that the lack of food was dramatic, in particular for people win the Vanni. There is a scarcity of water and waterborne diseases have been reported.

The statement said that not neglecting the openness of the Government to help the Tamil population and its request to the Church for help, that it is important to highlight the need to give humanitarian organisations access to the camps.

It also says there needs to be the quick settlement of people in their original villages or in safe villages when it is not possible to get back to their home villages.

Caritas Internationalis is calling on all sides to respect the rights of civilians to protection and for an immediate end to the hostilities.

Caritas Internationalis launched an appeal last year for US$ 2,411,764.25 to provide 100,000 people affected by the conflict in Sri Lanka with access to shelter, relief supplies, education, livelihoods, water and sanitation, medical and social assistance, and counselling.