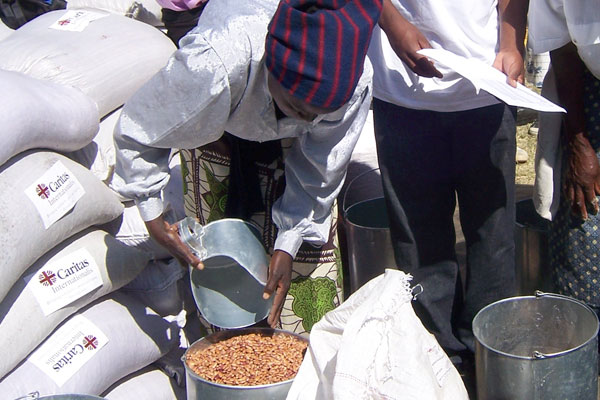 Families receive a one-month ration of maize, sugar beans and vegetable oil. Caritas is providing food to 3000 families – 15,000 people – in Gweru diocese. It is hoping to provide food to 14,000 families – or 70,000 people – across Zimbabwe for six months.
Credits: Cibambo/Caritas

Children in Zimbabwe are fainting at school from hunger – well at least in the schools where there are teachers. The cost of travelling to their job and buying lunch is often too much for their small salaries.

At home, mum or dad might skip a meal or two so there’s enough left for the children. That’s if mum and dad are still around. Zimbabwe has the greatest number of AIDS orphans per capita in the world.

If mum and dad are still around, dad might have sold his farming tools that he used to farm his small patch of land with so he could buy a little food for the family. If there’s just mum, she might have been forced into sex work, because with no money, fallow fields, no jobs and a broken economy, how else do you get money to feed a family?

Just some examples of the impact of hunger in people’s lives. There are many more examples such as stunting and slow educational development in malnourished children, more possibility of falling ill and the risk that AIDS drugs won’t work properly without regular nutritious meals.

Caritas launched an emergency appeal for US$7.7 million for Zimbabwe in January 2009. With the money Caritas wants to provide people with food, offer them seeds and training so they can grow produce to both eat and sell, work on water infrastructure and education to help prevent diseases such as cholera and provide adequate medicines.

Mr Mufunda explained that only one third of the money had so far been raised for the Zimbabwe appeal. This means ration cuts hit large families.

Funds permitting, Mr Mufunda says that Caritas wants to provide food to over 14,000 families across Zimbabwe for six months. But he says that there are also other institutions that need Caritas’ support, such as hospitals. Zimbabwe was once known as the “breadbasket of Africa” but a series of poor harvests have left the fields bare. Mr Mufunda says this is one of the reasons for the current crisis .

He says that despite a lot of solidarity from many Caritas member organisations across the world, more help is needed. He urges people to ensure that Caritas has enough funds to cushion the impact of the food and economic crisis on Zimbabweans.