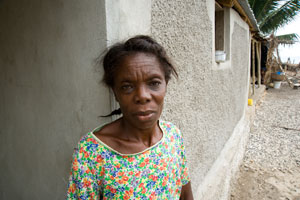 Caritas beneficiary Rolande Jean and her family are lucky to have survived the storms. With help from Caritas Haiti, they received cement and tin roofing sheets to help rehabilitate their home – one of 40 families in the town of Nippes who received such support from Caritas in the months after the storm hit.
Credits: Snyder/Caritas

Rolande Jean’s home sits a few feet from the edge of the Caribbean Sea, between the small town of Nippes, Haiti and, in September 2008, directly in the path of Hurricane Ike. When the Category 4 storm roared ashore, Jean huddled with her husband and children in their small wooden house, and bore the brunt of the storm’s fury.

“The house was very badly damaged,” Jean said. “The river flooded the house, and the roof was torn completely off. We were in the house when it happened.”

Forced from their home, the family took shelter with a neighbor across the street on higher ground, above the floodwaters left in the wake of the storm. Coming as it did on the heels of Hurricanes Gustav and Hanna, which wreaked havoc across Haiti, Ike was the last straw for many in this impoverished nation. In Nippes alone, nearly 1,400 homes were damaged or destroyed, affecting more than 7,000 people. Though she has seen storms before, Jena said that Hurricane Ike was the worst she has suffered.

“For us, this was the biggest hurricane,” Jean said. “Everywhere there was sea water.”

But help arrived more quickly than Jean imagined. In the days after the storm, an assessment team from Caritas Haiti visited Nippes – part of a broader Caritas response that eventually provided immediate care to more than 4,000 families across the country. Meeting then with Jean and other families hard-hit by the storm, they pledged assistance. Opening an office in Nippes in December 2008, one of ten Caritas Haiti now operates throughout the country, Caritas began distributing rehabilitation materials to 40 of the worst affected families in the town.

“They provided 20 sacks of concrete and 30 roofing sheets,” Jean said. “Caritas also helped to rebuild by paying laborers, and we helped build the house as well.”

Seeing the other needs that existed, Caritas also rehabilitated the Christroi de Maidan Primary School, which was also badly damaged in the storm. For farmers who lost their crops to the hurricane, Caritas has been providing seeds and tools to help them replant – a vital step in economic recovery in the wake of the devastating 2008 hurricane season. For the people of Nippes, such recovery cannot come soon enough.

“My husband is a fisherman, but he lost his boat to the hurricane and he has not been able to work since.”

Caritas has plans to continue with rehabilitation efforts after the current project cycle ends, focusing on road rehabilitation through Cash For Work projects similar to those that Caritas has undertaken in the city of Gonaives, where in just seven months such projects helped to clear the city of an estimated 75% of the three million cubic meters of mud deposited in the city after the hurricanes. As Haitians dig out from the storms of 2008, Caritas is also planning to focus more efforts on economic stimulation, both in Nippes and throughout Haiti – the poorest country in the Western Hemisphere.

Looking back on the weeks following Hurricane Ike, Rolande Jean is thankful for the help she received at a time when few options existed for she and her family to rebuild.

“Until Caritas provided assistance I had no help,” Jean said. “We lived with a neighbor after the storm, until the house was repaired.”

But as Caritas Haiti continues to help the people of Haiti recover from the disastrous hurricane season of 2008, memories of those storms linger in the midst of all who survived them. Even with her home now stronger than it was before, Rolande Jean echoes a sentiment shard by many across Haiti.

“I am afraid of another storm,” Jean said. “All I can hope is that another hurricane does not arrive.”