South Sudan on the brink 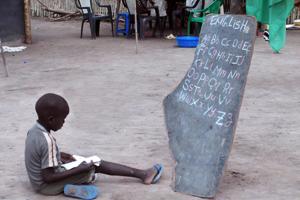 A child is learning English through a homeschool in Rumbek, South of Sudan
Credits: Limburger/Caritas Austria

The bishop’s map shows hit-and-run attacks peppering the length of Sudan’s border with the Democratic Republic of Congo. The raids are recorded village-by-village in tallies of killed, wounded, abducted. In Bangolo, five killed, four wounded, and eleven abducted over two days in January. In Gangura, six killed and six abducted in December. In Luru, three killed and four girls abducted on Christmas Day. On it goes.

Survivors from the small villages that lie deep within the dense rainforests of southern Sudan’s Western Equatoria State have told Catholic Church workers about rebels with machetes, axes, and guns who murder, rape, and then steal men, women and children.

“They cut people into pieces,” said Bishop Eduardo Kussala of Tombura Yambio in Western Equatoria. He says a group of Ugandan rebels called the Lord’s Resistance Army (LRA) are responsible for the “inhuman”, “sick” acts of violence.

Originally based in northern Uganda, LRA rebels have been driven out of their country and deeper into tropical forests of Congo by Ugandan, Congolese, and Sudanese armies. From there, the rebels have been carrying out horrifying raids both on the Congolese population and across the border into Sudan.

Caritas reported the LRA carried out massacres around Christmas in Congo, including 150 people slain while attending a concert in a Church. Although the rebels denied it, the UN later confirmed the killings had taken place. “We know it is the LRA,” said Bishop Kussala about the fresh attacks in Sudan. “They began almost immediately after the LRA moved into the area in December.”

The levels of violence and the abductions in Sudan and Congo bear all the hallmarks of an LRA attack. The rebel group has been accused of multiple human rights abuses in the past, including murder, mutilation, and abducting women and children for use as sex slaves. The International Criminal Court issued arrest warrants for the LRA commander Joseph Kony and four other LRA leaders in 2005.

Although a peace deal in 2006 effectively ended the war in Uganda, a rump of between 500 to 3000 LRA troops including Kony remain at large. Numbers fluctuate depending on how many people the LRA abduct and press gang into combat. They also operate in small cells of 10 to 20 soldiers, making it even more difficult to determine the size of the force. One thing is clear, whatever the number, they’re terrorising hundreds of thousands of people in the region.

Bishop Eduardo Kussala, a young bishop at 46 years, has only been in the job for twelve months. He’s a local and knows well the great challenges of working in an area where 9 out of 10 live below the poverty line, illiteracy is at 80 percent, and infant mortality rates are 30 to 40 percent. The LRA attacks add another level of suffering.

“It’s a disaster area. People have abandoned the rural areas for the towns for more protection,” said Bishop Kussala. He thinks about 200,000 people have been forced from their homes, about a fifth of the population of the state. Refugees from Congo have also fled into his diocese to escaping the killing. Church schools have seen their class sizes expand from 45 to 300 children.

“There is no effective government here,” said Bishop Kussala, “The Church provides all the social services such as health and education and now we’re looking after the people fleeing the violence.”

The Catholic Church and Caritas are working in camps and in host communities to try to meet the desperate needs, but risk being overwhelmed due to a lack of resources. Although the situation is bad now, the Bishop believes Western Equatoria State could be on the verge a “bloodbath”.

Sudan is just emerging from a long and brutal civil war between north and south. As part of the peace deal that ended that war in 2005, a separate autonomous government was set up in the south. Western Equatoria falls under the authority of the Government of South Sudan, based in Juba.

The government in the south is struggling to maintain security. South Sudan is a tinderbox of opposing ethnicities and tribes. Peace with the north has lifted the lid on rivalries in the south. There is an upsurge in violence between the different groups. The death toll is higher there than in Sudan’s other warzone, Darfur. The bishop says the failure of the government in the south to provide protection is a “time bomb”.

“The LRA attack at will,” said Bishop Kussala. “People see the Government of South Sudan taking no action to stop them. They see no option but to take up arms in defence.” Local militia have been forming to offer some protection. These groups are currently fighting with bows and arrows, spears and hunting nets. Inadequate against an LRA Kalashnikov.

South Sudan President Salva Kiir said in June that military reinforcements were on the way. “I promise I will not let you people down in quest for peace and security,” he said. But the UN Special Rapporteur on human rights in Sudan, Sima Samar has since criticized the inadequate response from the government on the LRA threat.

For Bishop Kussala, he says that the population is growing increasingly hostile to the government and fears the tensions could lead to an outbreak of “tribal war and genocide”. He is travelling his diocese to urge people not to react with violence, but there is only so much he can do and he believes time is running out for the government The instability and insecurity in Western Equatoria is mirrored elsewhere in the south, with banditry and deadly inter-tribal clashes on the increase. The Government of South Sudan is being criticised for failing to spend its oil money on infrastructure and development. The peace accord with the government in Khartoum is also under growing pressure with disputes over the speed of implementation. A referendum in 18 months time in the south on possible succession from the north could lead to further clashes.

Archbishop Paolino Lukudu Loro of Juba says the Church is doing all it can to support the peace process, because a return to war would have dire humanitarian consequences.

Listen to what the Archbishop says about some of the challenges the Church will face in the future.

Bishop Kussala is trying to get as many people as possible outside Sudan to see his map with its evidence of atrocities. His hope is the international community will re-engage with the peace process in Sudan, though he admits that there isn’t much interest for the problems of his part of the world. But hope is all there is left.