One year on from the Georgia conflict 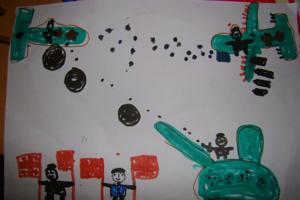 A picture drawn during a Caritas art class for children in Tibilisi.
Credits: Caritas

On 7th August 2008, a five-day war erupted between Russia and Georgia over the breakaway province of South Ossetia. For the hundreds of thousands of people caught up in the conflict, the battle to return their lives to normal still continues one year later.

The conflict has ended, the harsh winter has melted into summer and for many of us, the five-day war which took place in South Ossetia a year ago seems an age away.

But the people of South Ossetia are still paying a massive price for the brief war between Russia and Georgia. To start with, over 170,000 people in Georgia, North and South Ossetia fled their homes to escape the danger of shelling.

By fleeing their homes, they left behind their possessions, their jobs, their friends and all they had worked to build, and they had no guarantee of finding any of this when they returned after the war.

Once the war was over, Caritas started giving out food, hygiene kits and offering access to health care and counselling to help people deal with the  trauma what they had gone through. This went on through the winter months and right up until May 2009.

In addition to this, Caritas offered hundreds of children educational and recreational activities such as English classes, sports, dance and artistic pursuits. The activities kept busy the children’s bodies and minds and gave them both a physical outlet and mental relief following the anguish they had faced with the war.

One benefit of the project was that it integrated children with physical disabilities, who hadn’t previously been able to take part in such classes,  into the activity groups.

Caritas also offered job skills training to young people. Many of those who lost their homes in the war were villagers and they hadn’t ever competed for jobs in the city. Caritas helped teach them how to write a CV and how to look for a job, so they stood a better chance of getting work.

Michael Beruashvili, 16, had to leave his home in Tskhinvali because of last year’s war. He has been living in a centre for war refugees in Tibilisi since then. He’s been taking part in Caritas’ classes in English, ceramics and dance. He has also taken part in the job skills building classes.

“I learned some techniques, which I hope will help me to find a job. I want to earn some money and help my parents,” says Michael. “Besides these workshops I also had several consultations with the Caritas psychologist, which helped me to overcome the fear which I had constantly after the war.”

But Ilona Adamova, emergency programme manager with Caritas Georgia, says that one year after the war, people are still facing enormous challenges such as lack of a permanent home and unemployment.

“Caritas has been helping rebuild homes, renovate damaged kindergartens and create village meeting places where people can relax and socialise. With these and our other activities, we hope that they will provide the foundations so people can resume their lives. But many people still face a long, hard struggle to return their lives to how they were before.”