Why does West Africa face another food crisis?

Burkina Faso like several other countries in the Sahel region were affected by flooding in 2009. This will seriously affect food security in the next months.
Credits: Lane Hartill, CRS

Food emergencies are not inevitable in the Sahel according to Caritas. The region and the international community need to show greater political will to fight the problems.

The Sahel could face a devastating food crisis this year. Millions are at risk of famine and malnutrition in West Africa, especially in Niger, Chad, northern Burkina Faso and northern Nigeria.

Experts believe that the coming emergency could be particularly serious, mostly because of the bad harvest and floods in several countries last year.

“The governments of the Sahel countries are not doing enough to fight the problems, especially the lack of water supply and price speculations on the markets. Competition caused by massive agriculture subsidies in developed countries only worsens our problems”, said Fr. Tine.

At the end of January, Niger’s government said that 2.7million people will need emergency food aid. This is three times more than previous years. 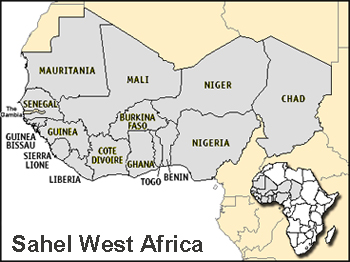 “We are checking out prices on local markets to get an idea of the scope of the crisis and are expecting a price explosion in the next few months. That is much earlier than in the past years”, said Bishop Paul Ouedraogo, President of Caritas Burkina Faso.

“In some regions, people are already encountering food shortages before the next harvest. That is very early”, he said.
Caritas is preparing aid operations for the most vulnerable. First, there will be free grain distributions. The agency will then sell food at reduced prices. Caritas will also focus on preventive measures. It will helps farmers increase their production by supplying better tools, high quality seeds and fertilizer.

Caritas will also works on water supply. That is a fundamental problem in these regions often affected by droughts. The agency will also builds stocks of grains in reserve for future emergencies.

“Mali alone could feed the whole Sahel region if only governments would put in place satisfying agriculture policies”, claims Fr. Tine. “The states need to invest in better water supply, using for example the Niger river in Niger and Mali”.

Caritas believes that farmers could improve their harvests thanks to better public management of the resources. This would allow the farmers to invest themselves in the modernization. They could finally break the vicious cycle of poverty and insufficient harvests.

Reality looks different. In order to survive, more and more small farmers have to sell their land to multinational agriculture firms.

While hoping that national and international authorities will decide to take action, the different Caritas organizations in the Sahel will meet for a summit in Ouagadougou from the 23 to the 25 February where they will decide how to tackle the food emergency.