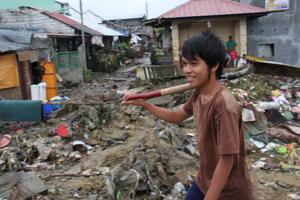 On Sept. 26, 2009, Typhoon Ketsana hit the main island of Luzon in the Philippines. About an hour outside of Manila, the residents of Santa Rosa in Bulacan province were hit hard, living right next to a river that flooded. Twelve days later they are still digging themselves out of the mud.
Credits: Debbie DeVoe/CRS

The residents of Mary Grace neighbourhood in Bulacan, Philippines, are used to adversity. Most lived in slums by the railroads for years before being relocated by the government to a new riverside neighbourhood. From time to time, the river rises and floods their homes.

While inconvenient, they say prayers to God for keeping their families safe and look to the Catholic Church for spiritual and physical support. But on September 26, 2009, the flooding caused by Typhoon Ketsana was unlike anything they had ever seen.

“People ran to the church, but water started to rise there too,” says Father Vic Robles, a local Catholic parish priest who has helped poor residents in the area to build homes over the years.

“We prayed, and three hours later the water went down.” Most residents stayed in the nearby school overnight before returning to see what had happened to their houses. They were in for a shock. Tonnes of mud — so thick and gummy it was difficult to slog a way through — awaited them.

Marisa Villarin, who lived with three families, came back to find nothing but the square cement foundation of their home sitting desolately at the top of the riverbed cliff. “We are trying to stand up and build our lives again,” she says, hugging her young son to her chest.

Marisa’s family was one of the first recipients of extensive kits of essential
household items being distributed by Caritas Philippines (known locally as Nassa). The kits, designed with care to honour the dignity of each affected family, can’t replace what Filipinos have lost.

But the variety of basic household items are helping people to return to their homes.

‘I Have to Throw it All Away’

Virgilio Chua, owner of a school supply store, was on the other side of the river when the typhoon hit.

The community’s hanging bridge was washed away, so he couldn’t get back to his house or children until the next day. “I came back Sunday morning, and everything was turned over. All my papers and posters are ruined.

They’re all stuck together,” he says, adding that he will need a loan to start his business again. “I have to throw it all away.” Fortunately his children ran to the school, where they stayed the entire past week while Virgilio and his wife cleaned the mud and debris out of their home.

“I would like to have your prayers for us,” Virgilio adds, “so we can stay healthy and don’t get sick and can start again.”

Long Months of Cleanup and Rebuilding to Come

Twelve people who were living in former government barracks at Arayat National Park weren’t so lucky. They lost their lives when unimaginable quantities of mud their homes.

In total, 52 houses were destroyed by the landslide, with another 150 families losing many of their belongings.

More than 300 families in this area have now evacuated to one of the park’s conference centre. Many will need to relocate for future safety.

“They’re living in panic and fear because the rain continues,” notes their parish priest.

Diocesan staff in affected areas immediately began delivering food and clothing donated by generous Catholics in nearby parishes and other kind souls.

Catholic Relief Services (CRS is a member of Caritas Internationalis) also began working with Caritas Philippines to arrange for additional food deliveries to 5,000 families and to start assembling the needed kits of household items.

Now Caritas Philippines are exploring their next relief efforts, likely to include some shelter repair, community cleanups with cash for work, and provision of uniforms and school supplies to affected students.

“Sometimes we don’t have much to give, but we can give of ourselves,” says Sister Rosanne Mallilin, executive secretary of Caritas Philippines.

With the help of Caritas partners, and additional donors, Caritas Philippines will hopefully have a lot more to give in the long months of cleanup and rebuilding of lives to come.

Debbie DeVoe is CRS’ regional information officer for eastern and southern Africa. She is assisting with our emergency response in the Philippines. CRS is a member of Caritas Internationalis.