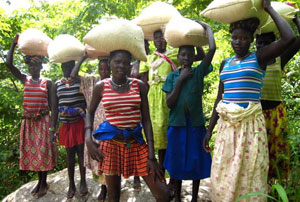 Young women carrying maize from Ikotos to their villages behind the mountains
Credits: Birgit Kubelka/ Caritas

Over 1.5 million people in South Sudan are facing a widespread food emergency caused by droughts and conflict. Caritas is appealing for US$ 3,4 million (EUR 2,3 million) to give vital food aid in Western and Eastern Equatoria states.

South Sudan is one of the poorest, most underdeveloped countries in the world with 16 percent of the people malnourished, nine out of ten people living on less than $1 a day, and the highest maternal mortality rate in the world. On top of the daily struggle to live, drought and conflict have pushed already poor communities into desperation.

Suffering on two fronts
Dry spells have compounded hailed harvest in 2008 and 2009 inEastern Equatoria. Many areas will not expect a harvest now until mid-2010. Over a 800,000 people are in need.

Conflict in Western Equatoria has rapidly spiraled after the arrival of a militia called the Lord’s Resistance Army (LRA) late last year. As many as 68,000 people have fled from their homes and farms.

The insecurity and isolation of many of the communities means that people are only receiving international aid through the Catholic Church. 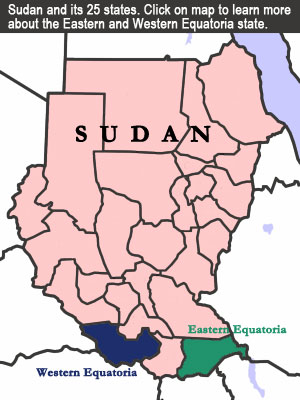 Caritas response
Caritas Internationalis Humanitarian Director Alistair Dutton said, “People need food in South Sudan because of conflict and drought. Caritas is in an excellent position to be able to reach them though its community networks present in the most isolated or war-affected areas.”

Caritas will provide 10,000 people in Eastern Equatoria with food aid and planting materials, and train farmers on improved farming techniques, in order to support people’ livelihoods until harvest in 2010.

In Western Equatoria, Caritas will provide food to 25,000 people in Ezo, Tombura and Nagero, which are too remote or dangerous for other aid agencies to work.

Caritas advocacy
There is an urgency for peace in Sudan. Violence is worse in the south than in Sudan’s other humanitarian crisis in Darfur. Leaders in Sudan must ensure that the terms of a peace deal signed in 2005 are upheld.

The United Nations Security Council must put South Sudan at the top of its agenda now rather than be faced with a major humanitarian crisis in 2010 and 2011.

How you can help?

Support our Sudan Hunger Appeal.
Caritas is appealing for US$ 3,4 million (EUR 2,3 million) to give vital food aid in Western and Eastern Equatoria states.

Pray the Rosary.
Pope Benedict XVI prayed the Rosary on October 13 “with and for Africa” as part of the 2nd special meeting of the Synod of African bishops in the Vatican. Join us in praying the Rosary for Sudan and all of Africa.

Support climate justice
Like the drought in South Sudan, seven out of every ten disasters is now climate-related. Find out more about our climate justice campaign.