Putting a roof over the heads of Chile’s quake survivors 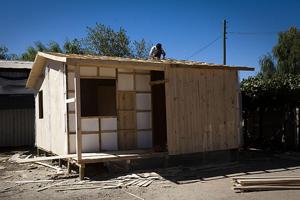 The Caritas prototype shelter that is to be distributed to 3,000 families in the Maule region, hit hard by the February 28th 8.8 magnitude earthquake and subsequent tsunami in Chile.
Credits: Katie Orlinsky/Caritas 2010

Iloca used to be a beautiful little village everybody went to in the summer, about 100 km away from the city of Talca.

The blue, red and yellow coloured houses built on poles were close to the shore, the river ran in to the sea just in front of the village and a sand dune kept the Pacific Ocean well away. On Saturday, February 27th, everything changed.

After the 8.8 magnitude earthquake hit Chile at 3.34 in the morning people were wide awake.

“We immediately knew we had to leave”, says Mavet Rivera, who ran a little fish store close to the Beach. So she took her three sons, jumped into the next car and went up the hill. Then the sea rolled in.

Three waves washed away Iloca. “The radio was telling us that there would not be a Tsunami, when we actually saw it,” she said.

The wave came in from the side, tore Mavet’s house off its poles and devastated the whole shore. Today there is no river anymore. It disappeared, just like the sand dunes summer guests used to lay on to enjoy the sun. The Pacific Ocean hits the shore hard.

Mavet Rivera is standing next to where her house was, and looks out to the Ocean. Right next to her there is a white fridge. It used to be in her kitchen. Mavet cleaned it, but it is not working anymore. She also found a stereo which is broken. And she found an old photograph of two horses which used to hang on her living room wall. “This will be in my new house too”, she says.

This new house might be build by local Caritas. At the moment, an evaluation is going on all over Maule region to see who will be beneficiaries.

“We are focussing on the more vulnerable areas, such as the coastal region and very much on the countryside, because nobody else has been there so far”, says Jorge Brito, Executive Director of Caritas Maule.

Since tents are not apt for this climate, Caritas is working to provide a more permanent shelter.

A first prototype of this wooden house has already been build in Talca, the region’s capital. For 3.500 Dollar this house, build on poles to keep off the rain, offers a living room and two bedrooms. A metal roof and good insulation will provide enough protection against the low temperatures during the winter.

“There is also a little veranda”, says Jorge Brito. “These little details are very important, to make people feel more at home.”

Similar houses were already used in 1985, when the last earthquake hit the region. Even today people still live in these houses, as they can be extended and two additional bedrooms can be added if necessary.

Caritas is trying to build a few thousand houses as of now, depending on the outcome of the evaluation. It only takes three to four hours to put one up. This work will all be carried out by volunteers.

“We need a house very fast, before the winter sets in”, says Mavet Riva in Iloca. However, this new house will not be build close to the sea where her old one was. It will be built further away on a hill. Away from the deadly sea.