First signs of reconstruction in Haiti 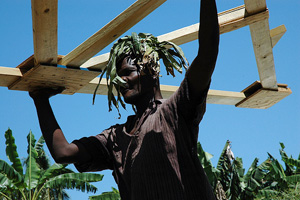 Builders setting up the first temporary shelters in Haïti in Haute Lompré, a small community nearby Léogàne.
Credits: MathildeMagnier/Caritas

As the resettlement of hundreds of thousands of earthquake victims in Port-au-Prince becomes ever more challenging ahead of the rainy season, Caritas starts setting up temporary shelter in rural areas.

Bolivar Tasic is resting. The burning sun at midday is wearing her out. Sitting in the shade of the only tree on her small patch of land, she curiously watches the engineers who have been working all morning to finish her new house.

“Great, I will finally have a place where to put my belongings and those of my two sons,” says Bolivar. She points to some kitchen utensils, neatly aligned in the middle of the rubble.

Like most inhabitants of the small rural town Haute Lompré, located in the heights of Léogàne west of Port-au-Prince, Bolivar has been seriously affected by the 12 January earthquake in Haiti.

Her little house and the small land parcel she and her husband used to grow cassava, peas and corn on have been completely destroyed. All there is left is a pile of rubble and soil. However, her future seems a bit less insecure since Caritas staff has started building semi-temporary housing in the area.

More than 100 of these little houses made of pine wood and iron roofs have been set up around here. They are the first out of roughly 160,000 temporary houses the international community has projected to build for hundreds of thousands of earthquake victims. Eventually, Caritas should build another 2,000 of them around Léogâne and Petit Goave.

“We need to hurry. With the rainy season and possibly hurricanes coming, the situation will get very difficult here, “says Caritas coordinator Stephen Adams.

At a time when the resettlement of earthquake victims is becoming more and more challenging in Haiti, inhabitants of rural communities are encouraged to stay where they are. Like the other beneficiaries of the programme, Bolivar owns her land. That is rare in Haiti, but “essential for this project”, says Stephen Adams.

“People need to stay where they live. This way, we can act in a more coordinated and long-lasting way and give the population the means to transform their temporary solutions into permanent ones. With our help, people get a roof over their head but also the tools they need to grow food on their land.”

In Haute Lompré, the initiative is welcomed with enthusiasm and relief even though people are also a bit anxious about those little houses without walls or partitions, covered only with tarpaulins.

“The plastic works for now, but it is not going to protect us indefinitely” says Jean Edouard Williams. “What are we going to do when the plastic is torn? We don’t have the means to replace it,” continues the ‘Cazec’, the head of the little community of Haute Lompré.

The Caritas engineers’ response is: “We are helping you respond to the most urgent needs. But after all, it is your house. You need to think of a way you can transform it and decide what type of walls you want to build.”

“People need to be given a sense of responsibility,” says Jip, an architect who recently joined the project. Eventually, the objective is to push inhabitants of rural communities, often very isolated from each other, to get involved in community matters. That would create a sense of common belonging and encourage people to work and make decisions together according to common objectives and needs.

While things are starting to improve in the Léogâne area, the situation remains highly complex around Port-au-Prince. Despite continuous clearing work, the rubble remaining in the streets considerably slows down reconstruction. The camps are so densely populated that no temporary houses at all can be built there. The problems are worsened by unclear ownership in many cases. Only a few hundred semi-temporary shelters have been built in the capital so far.