Preparing for the worst in Honduras 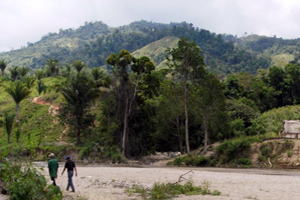 Being prepared is key to living in areas prone to disasters, such as El Porvenir. Organising community emergency committees and providing training in essential emergency response skills has ensured that in isolated areas local people are equipped to deal with the immediate impacts of a major weather event in the first – crucial – hours.
Credits: Trócaire

Reaching the communities of El Porvenir is no easy task. The steep, 8km climbing track is often impassable by vehicle during the storm season. Villagers can be cut-off for days at a time unable to gain access to food and water and losing valuable days of work and school. In October 2008 Tropical Storm 16 entered Northern Honduras from the Caribbean. Seven intense days of rainfall lead to severe flooding and landslides, damaging crops and houses and leaving the community inaccessible and 136 families without homes and with an uncertain future.

Climate change only increases that uncertainty. Tropical storms and excess rainfall, annual occurrences in Honduras during the hurricane season, are predicted to intensify in scale and frequency as climate change generates more severe weather-related events. The experience of communities in Honduras over the past number of years reinforces that prediction. Weather is becoming more erratic and extreme, whether it is the increased number of storms affecting the Northern coast or the extended lengths of the droughts in southern Honduras. In the face of this challenge, communities – like those in El Porvenir – face the difficult task of adapting to an even more testing environment.

Weather events such Tropical Storm 16 devastate people’s lives, wiping out their crops, livestock, household belongings and homes. An increase in the frequency of extreme weather events means the time people have to recover from one storm to the next, or to rebuild their home from one landslide to the next, is much reduced. More often than not it is insufficient for people to get back up on their feet, with the effect that every flood or storm pushes people further into poverty as their assets are depleted and the chance of earning a livelihood eroded. Trócaire, in supporting local partners, seeks to protect people’s lives and livelihoods and ensure that their capacities are strengthened to cope with extreme weather patterns, both now and in the future.

Being prepared is key to living in areas prone to disasters, such as El Porvenir. Organising community emergency committees and providing training in essential emergency response skills such as first aid, search and rescue and shelter management, has ensured that in isolated areas local people are equipped to deal with the immediate impacts of a major weather event in the first – crucial – hours. In areas at risk of flooding, early warning systems have been set up to alert people to the immediacy of a flood. By knowing how much time they have before a flood hits, community members can seek safety for themselves, their families and their belongings and in doing so, protect themselves and prevent the losses that would have occurred otherwise. Participatory techniques have been used to analyse vulnerable areas within people’s own communities and to develop community risk maps, increasing local capacities to understand and react to risks. Reducing households’ vulnerability to certain hazards has also been achieved by relocating families from areas particularly susceptible to flooding and landslides and by building houses that are flood and earthquake resistant.

As well as ensuring communities are sufficiently prepared to cope with more extreme weather events, managing the local environment also plays a hugely important role in reducing the potential negative impacts of this weather. Sustainable and ecological use of soil and forest resources, combined with an integrated approach to managing allotments, small holdings and water basins has helped to support and protect the livelihoods of people that depend on their local environment for its resources. One initiative feeding into this approach has been to seek alternative energy sources to firewood. In El Porvenir, as in countless other communities across the developing world, an over-reliance on wood for fuel has resulted in widespread deforestation, leaving communities more vulnerable to flooding and landslides. In response to this, a number of Biodigesters were built in El Porvenir to provide poor households with an alternative fuel to firewood. Biodigesters are a relatively simple technology which produces methane gas from waste material. This gas can then be used for cooking and lighting, therefore reducing the reliance on wood for fuel. As part of a wider approach to natural resource management, the use of alternative energy sources allows depleted forest resources to be replenished, which in the longer-term offers communities vital defences against flooding and landslides.