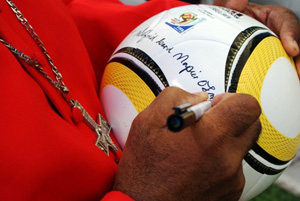 Sport is a recognised instrument for promoting solidarity, peaceful conflict resolution, justice and inter-faith dialogue, as it disregards both geographical borders and social classes. Credits: Church on the ball

Caritas is hosting a Football Peace Cup in South Africa’s poorest communities as the Football World Cup is being held in its stadiums.

In a joint initiative with the Franciscan inter-faith Damietta Peace Initiative, Caritas is organising a ‘Soccer Peace Tournament’ in the township of Atteridgeville near Pretoria, bringing together people of different faiths, races and nationalities.

“South Africa was torn apart by xenophobic violence and many people say it is still brewing under the surface. We thus seized the opportunity of the World Cup to drive home a message of tolerance,” said Lancelot Thomas, Country Coordinator for the Damietta Peace Initiative in South Africa.

The event will kick off on 5 June and will be held in parallel to the FIFA World Cup. Players from 15 countries all over the world, mainly young adults, will compete for a whole month to enter the great final on 3 July.

“Whereas the world cup pits country against country, we, in our peace cup, want to have teams experience the friendship and common humanity of mixed teams. The teams participating are all South African based but are representing various refugee groups. The chief criterion is that each team be comprised of multiple nationalities in order for them to be allowed to play”, said Mr. Thomas.

Sport is a recognised instrument for promoting solidarity, peaceful conflict resolution, justice and inter-faith dialogue, as it disregards both geographical borders and social classes.

“The Peace Cup follows on an idea that some of our peace groups had in Nigeria following the 2008 religious violence in that country. Here the idea arose to combine Muslims, Christians and animists on the same team to feel what it is like to have a team-mate that is regarded traditionally as an enemy. This was a great success,” said Mr. Thomas.

Caritas has been active in peace building in South Africa for many years. Following anti-immigrant violence in May 2008, the Damietta Peace Initiative and Caritas joined forces to create and nurture peace groups all over South Africa, promoting reconciliation and non-violence with a special focus on grassroots communities.

“The whole of South Africa and the world is in football fever mode. Even though teams will be competing against each other we hope that peace and building cross cultural relationships will be the winner of the day”, said Mr. Thomas.

Watch the official “Church on the Ball” video on the work of the Catholic Church in South Africa, against the backdrop of the 2010 Football World Cup. Copyright: Southern African Catholic Bishops’ Conference