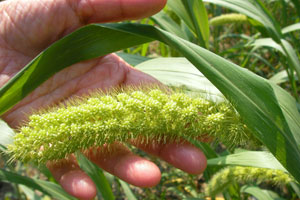 Caritas promoted organic farming to the victims of Typhoon Morakot to assist them in rebuilding their lives.
Credits: Caritas Taiwan

Typhoon Morakot was the most distressing catastrophe to hit Taiwan in 50 years, devastating several areas in the south of the country. The heavy rainfall on August 8, 2009 caused mudslides and flooding that buried the entire town of Xiaolin. Hundreds of lives were lost and hundreds more were left homeless and displaced. Morakot’s aftermath resulted in billions of dollars in damage to infrastructure, as well as to agriculture that supported the aboriginal people.

Climate change has led to an increase in the frequency, intensity and unpredictability of weather. Floods and landslides are on the rise due to heavy rainfall, higher wind speeds and an increase in storm intensity.

After the typhoon hit, the only access to the affected villages was by helicopter. Hundreds of people from the Kaoshiung and Chiayi counties were airlifted to safety. In Pingtung County, however, thousands were trapped in coastal towns without electricity and drinking water. Livestock was drowned and their decaying remains raised public health concerns.

In the wake of Typhoon Morakot, the Catholic Church in Taiwan, the Bishops, all the dioceses and diocesan Caritas launched charity and fund raising drives for relief assistance to the victims.

Caritas promoted organic farming to the victims to assist them in rebuilding their lives. During the resettlement process, a certified organic farmer trained people on how to use this alternative method of farming. Caritas contributed to this effort by donating an excavator and a bulldozer to be used in preparing the farmland for the organic farming, a truck for delivering and transporting the farm products. They also provided a 360 sqm tent and two prefabricated houses to be used as temporary shelter for gatherings and workshops for the aborigines’ community.

This experience also raised awareness among the aboriginal people regarding territorial rights and policies. Leaders of the aborigines people are protesting the Taiwan government’s plan to “re-map” their territories, which would have serious implications to their unique culture and way of life.

Caritas Taiwan’s relief assistance to the victims of Typhoon Morakot was manifold. They immediately sent 500 charity packages that contained food, blankets, medicines and utensils to the affected areas. Some of the packages were transported by helicopter to be delivered to the people who were stranded in remote areas. Caritas Taiwan’s early recovery relief efforts awarded three-year schooling subsidies to almost 500 poor students who were displaced or lost their families by the typhoon and donated computer printers and internet servers to the schools.

In the past two decades, Taiwan has been working in cooperation with the international community to implement environmentally friendly policies and technologies. As a result, Taiwan’s environment has significantly improved, the public’s environmental awareness has heightened, and in 2008 Taiwan’s overall carbon dioxide emissions decreased for the first time. Much more remains to be done, however, and Caritas Taiwan continues to play a role by assisting local communities that are most vulnerable to the harsh realities of climate change.