Trafficking in Bosnia and Herzegovina 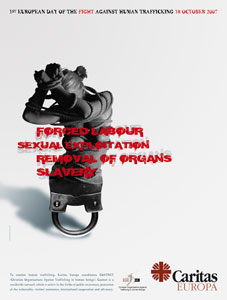 In the middle of 1990 people trafficking became a very serious and complicated problem in the countries of Eastern and Central Europe, such as Bosnia-Herzegovina.

With the collapse of communism, woman from Central and Southeast Europe become the largest group on the trafficking market in the region, mostly for the purpose of sexual abuse.

After the war, when Bosnia-Herzegovina first faced this problem, it was extremely hard to solve because there was no legal framework that acknowledged this crime as a trans-national form of organized crime and there was insufficient knowledge about the trafficking problem.

In the beginning, Bosnia-Herzegovina was characterized as a transit country to West Europe but also a destination country for women coming from Central and Southeast Europe.

Latest information indicates that the number of trafficking victims who are citizens of Bosnia-Herzegovina is increasing.

International community and non-governmental organizations were the first ones to get involved in the trafficking problem in 2000. The Government of Bosnia-Herzegovina  joined in trafficking prevention actions.

A series of legal, administrative and operational measures was undertaken, the majority of which were included in the first 2001 action plan. The decision of the Council of Ministers in 2003 established an office of state coordinator and structures for anti-trafficking and illegal emigration.

Trafficking, especially women and children, is trafficking in human misery and naivety and represents one of the biggest crimes of our time. Examples of trafficking are forced prostitution, unpaid housework, baby sitting, care of the elderly, illegal work, forced residence, debtor slavery, fake adoption, sex-tourism and entertainment, pornography, begging, and the sale of human organs.

Financial support for anti-trafficking in Bosnia-Herzegovina comes from Caritas and the Government of Norway and in partnership with Catholic Relief Services.