Migration: weighing up the options 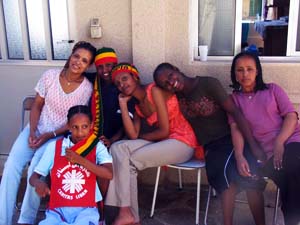 Caritas provides counselling and assistance to migrants, who may find themselves alone in a country where they don’t know the language.
Credits: Caritas

They cross deserts in Mexico and they take to rough seas in unsafe boats in North Africa. They risk alienation, rejection and poverty far from home to create a better life for themselves and for their families. Many of the world’s migrants do this because there’s no better alternative.

“History has shown us that people will always migrate,” says Martina Liebsch, Caritas Internationalis’ Advocacy coordinator for Migration, Trafficking and Gender, “but Caritas would like migrants to be able to make an informed choice, based on different opportunities, about whether to leave their countries or not.”

Lack of opportunities in their home countries is one reason why people migrate. People may also go abroad to work because of war, poverty or so they can better support their families by sending money – remittances – home.

“Around half the world’s migrants are women and Caritas Internationalis focuses its migration work on women,” says Ms Liebsch. “We do this because they are vulnerable and they can experience a lot of exploitation and indecent working conditions.”

She says that the migration of women has a big impact on the family and society in developing countries.

“In some countries they talk about a “lost generation” of children growing up,” says Ms Liebsch. “The mothers and fathers migrate and the children are looked after by a grandparent or someone else.”

The migrants themselves may also face grave difficulties in their new lives. Some of the challenges include exploitation by traffickers, unemployment, poor wages, few or no rights, as well as the pressure to succeed so they can justify their choice of migrating, and the burden of having to earn enough to send money to their families.

The theme of migration unites the 162 member organisations of the Caritas global network as many of them have experience as either a host or origin country.

Caritas provides counselling and assistance to migrants, who may find themselves alone in a country where they don’t know the language.

Assistance may take the form of legal advice, language courses, training and skills development, help in establishing employment contacts, help in adapting educational diplomas so they are recognised by the host country and also moral and psychological support.

Ms Liebsch says Caritas raises awareness among communities and host governments about the meaning and benefits of integration. But, she says, migrants’ integration often depends on people’s flexibility and a country’s political will.

Caritas also advocates for more legal channels of migration. Also, Caritas’ work on sustainable return tries to ensure that if people decide to go back home, they prepare thoroughly before returning and they have a reference point once in their country.

Ms Liebsch says that migrants are a source of change, diversity and hope and they challenge societies’ attitudes.

But, she says that the current gloomy economic climate may pose quite a few problems for the world’s migrants.

“Increased unemployment will mean natives in host countries will take on the lower-skilled jobs traditionally done by migrants,” says Ms Liebsh. “Competition in the labour market will become tougher and in the worst case scenario this may lead to social unrest and xenophobia towards migrants.”

Downturns in exchange rates may also mean that many migrants will send less money home.

The future doesn’t look much better as the effects of climate change will increase the number of people leaving their lands to look for food, money and a stable home.

“Some estimates say that 150 million people will become “climate change refugees” by 2050,” says Ms Liebsch. “There are currently no real instruments to protect people affected by climate change but it’s one area that shows the inextricable link between migration and the need for development.”

While more and more people will be tempted to migrate, Caritas is working in many of the areas that affect migrants’ decisions: climate change, peace and reconciliation, global emergencies, economic justice and of course, migration.

“We want to stop ‘forced migration’ where people leave their homes due to lack of opportunities, economic reasons and climate problems. One major question for us is: can development and migration work together so that migration becomes a choice?” says Ms Liebsch.

The World Day for Migrants and Refugees, which will be celebrated on 18 January 2009, reminds us to “live brotherly love to the full without making any kind of distinction and without discrimination, in the conviction that anyone who needs us and whom we can help is our neighbour”.