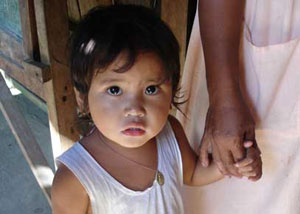 “Child trafficking and sexual exploitation of women and minors are the basest and most severe forms of abuse that occur frequently in the impoverished regions of the country,” said Sr. Rosanne Mallillinof Caritas Philippines.
Credits: Caritas Philippines

Alice was 25 when she left her job in Manila, the Philippines. She is a qualified civil engineer, yet her salary was not enough to pay for her four brothers and sisters to go through school. When she saw an advertisement offering well-paid posts as civil engineers in Kuwait, she contacted the recruitment agency immediately.

She had to pay half the agency’s fees up front, agreeing to repay the rest on taking up her position. But when she arrived in Kuwait she was told to sign a contract to work as a domestic servant. The agency refused to allow her to return to the Philippines, insisting that she take up the post and pay them the money she owed. For two and a half years she worked as a domestic servant for a family. She never had a day off, and regularly worked 20 hour days.

“Child trafficking and sexual exploitation of women and minors are the basest and most severe forms of abuse that occur frequently in the impoverished regions of the country,” declared Sr. Rosanne Mallillin, spc, Executive Secretary of Caritas Philippines (NASSA).

In statistics released by the Asia ACTS Against Child Trafficking, the Philippines together with other south-east Asian countries, account for four million women and children who have been trafficked illegally.

This figure, according to Sr. Mallillin, “should be a strong enough signal to move all sectors in the country to help abate the distressing incidence of child trafficking”.

NASSA is fortifying its Pan Asia Programme against child trafficking. “Having a transnational linkage with established institutions is definitely an incentive,” adds Sr. Mallillin.

“NASSA is deeply committed to combating child trafficking and to protecting its victims. As such, international partnership allows member-organizations wider latitude in terms of tracing the whereabouts of victims, uncovering the route of trafficking, and apprehending the criminals. NASSA has direct contact with Asia-wide Caritas organizations, – one of the leading agencies advocating against child trafficking.”

NASSA intensified its Child Trafficking Programme in March 2006, which focuses on community mobilization for effective and efficient delivery of basic social services, with provisions for healthcare, education, and other development programmes. The programme strategy, in turn, addresses concerns such as lack of basic education due to poverty, and exposure to violence and unsafe environment brought about by development aggression, militarization, and high urban poor population.

NASSA, together with Diocesan Social Action Centres (DSACs) in the Philippines, is celebrating the “Day Against Child Trafficking” on 12 December through simultaneous activities conducted in 37 archdioceses.

The programmes include awareness-building through symposia on child trafficking, reproduction and distribution of anti-trafficking posters and materials to community members, art competitions, photographic exhibitions, and films screenings that discuss the destructive consequences of child trafficking.