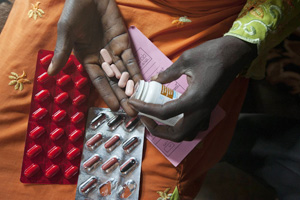 AIDS medication has transformed the lives of adults with HIV in Nigeria. If only it was child friendly too.
Credits: Karen Kasmauski/CRS

This World AIDS Day on 1 December, Caritas is urging governments and pharmaceutical companies to invest more in HIV prevention and care for children and reducing mother-to-child transmission.

“We need to give children with HIV the chance to live,” said Cardinal Oscar Rodríguez Maradiaga, President of Caritas Internationalis. “Caritas asks governments and drug companies to support better and earlier testing and treatment for these children. This is a life or death situation.”

Caritas says many children and women are still being left behind in the fight against AIDS, despite welcome advances in HIV testing and treatment.

The UNAIDS Global Report for 2010 says 2.5 million children are living with HIV. The report says 90 percent of HIV-positive children live in Africa but only 26 percent of them are receiving life-saving treatment. Fifty percent of untreated children with HIV die before their second birthday.

Child-friendly medicines are manufactured in specially adapted dosages and formulations. They should include fixed-dose combinations of anti-retroviral medications to avoid under- or over-dosing.

These medicines are available at low-cost in many parts of the world, but mothers often avoid testing because they fear stigma and discrimination. Ninety percent of HIV-infected infants are born to mothers who were never tested and never received medicines to prevent transmission.

Caritas member organisations have been active in the HAART for Children campaign. Caritas Australia is mounting an electronic post-card campaign to encourage further research and development on paediatric medicines. Caritas Austria handed over 21,000 signatures collected by young people to the Austrian government in an effort to increase HIV funding for poor countries. Caritas India is working with students to monitor and report on the situation of HIV-positive children in local communities.

During 201, the Caritas will focus on advocacy for lower prices with an expanded range of HIV medications; on making accurate paediatric HIV and TB testing tools available at local clinics, rather than concentrating them in urban centres; and on promoting greater access to prevention of mother-to-child transmission programmes.