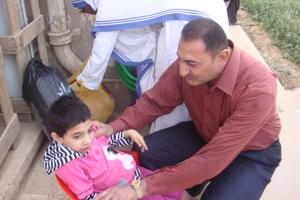 Saad Edwar Sa’ati was killed by terrorists as he worshipped at Mass. He was a community volunteer, helping the disabled and elderly.

Amid the bullet holes and blown out windows in Our Lady of Salvation church in Baghdad are names of the dead taped to the floor. They were massacred when terrorists stormed the church during Sunday Mass on 31 October.

One of the 44 worshippers killed was Saad Edwar Sa’ati, a volunteer for Caritas Iraq working with the city’s poorest and most vulnerable regardless of religion or politics. Two other Caritas volunteers Saham Adnan and Salam Adib were also killed.

The Caritas Iraq’s approach to poverty and conflict in the country includes a community volunteer programme. Caritas Iraq also runs peacebuilding projects bringing Christian and Muslim people together in a safe environment to share experiences.

Saad Edwar Sa’ati was one of Caritas Iraq’s most highly respected volunteers. He would make sure the elderly got their shopping, disabled children could enjoy a fun day out and dressed up as Father Christmas to give presents to poor families.

“He was always with the poor, elderly, disabled and a friend to all, and all testified to his nobility,” said Nabil Nissan, Executive Director, Caritas Iraq.

Saad’s mother Eileen Najib Bunni, had already lost one son  during the Iran-Iraq war in the 1980’s. During the same conflict, a son-in-law lost one of his legs.

Saad had supported his elderly mother as well as his sister and her disabled husband who is unable to work and their two young children. They all lived in his home. Just five months ago that house was the scene of great joy for the family when Saad and his wife were married.

The home now stands scorched and empty. Ten days after the atrocity in Our Lady of Salvation church, terrorists blew up the family car parked outside the home. Much of the house was destroyed in the blast.

The family are too terrified to stay at home and are living with neighbours or sleeping in the Church. Saad was the family’s source of income. His 13-year old nephew must work in factory so the family has an income. Caritas volunteers are visiting them, providing what support they can.

The persecution has continued with a series of bomb and mortar attacks targeted the homes and businesses of Christians in Baghdad, killing six people and wounding 33 others. Two Christian men were killed in Mosul, where Saad’s other sister lives.

More than 46 churches have been attacked since the US-led invasion of Iraq in 2003. Many mosques have also been attacked, but Christians are feeling specifically targeted and unprotected. Caritas Iraq is urging for greater protection from the government.

“Many of the Christian religious men were and still are encouraging the Christians to stay and face this ignorant brutal enemy,” said Nabil Nissan. “But the call to stay will surely find no one to listen to it as long as there is no peace, dignity and safety for the Christian Iraqis.”

Between 800,000 and 1.2 million Christians lived in Iraq before the US-led invasion of 2003 but that number has since shrunk to around 500,000 in the face of repeated attacks against their community and churches. 40 families left Mosul in November.

Caritas board members meeting in Rome in November held a special prayers for their colleagues in Iraq.

“Saad Edwar Sa’ati, Saham Adnan and Salam Adib were beacons of hope in Iraq,” said Cardinal Oscar Rodriguez, Caritas Internationalis President. “As volunteers for Caritas they showed that there are people with a different vision for Iraq other than bloodshed, one based on love for your neighbour whatever their religion.

“Those lights have been put out through violence and it is tragic. That their mourning families continue to be persecuted is an outrage. Christians in Iraq are facing obliteration. It is not because they are Christian that we are urging for greater protection, but because freedom from persecution is a basic human right of everyone. Christian or Muslim: all are hostage to violence.”

View a photo gallery from Iraq