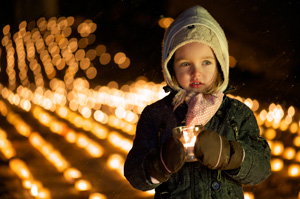 A little girl with her candle during “A million stars” initiative in Switzerland. Credits: Caritas Switzerland

On 18 December, squares, bridges and buildings in 200 towns and villages will be illuminated by thousands of candles. The event, called “A million stars”, is organised by Caritas Switzerland as a sign of social cohesion and solidarity with the most vulnerable and disadvantaged.

The economic crisis in Europe and Switzerland, together with natural disasters in Pakistan and Haiti in 2010, have shown us how much such fundamental values as social cohesion and solidarity are necessary.

Revenues from the sale of star-shaped candle-holders on behalf of the “A million stars” initiative will be equally shared between disadvantaged people in Switzerland and a child protection project in the Philippines.

In Switzerland, revenues from the sale of candle-holders will go to support Caritas Stores where people living at or below the poverty line may use a special voucher to buy essential items at reduced cost.

In the Philippines, 4,500 children and young people under threat from people trafficking and sexual exploitation receive protection and counselling thanks to the initiative. Visayan Forum, a Caritas partner organisation, encourages mutual aid between neighbours and prevention, and also directly organises meetings and training courses for children and parents in shanty towns. Thanks to grants, 100 boys and girls can attend school.

The “A million stars” initiative has its imitators as far away as the Philippines. It has inspired the leaders of the Visayan Forum, who have transferred it to the shanty towns of Manila, including participation by children who benefit from the project. A sign of gratitude, this bridge between Switzerland and the Philippines shows that light can travel.

Watch this film about the initiative

Light a virtual candle at: www.unmilliondetoiles.ch

“One million stars” in Germany

Caritas Germany have launched this year’s campaign “One million stars” on November 13th to support the “Zero Poverty” campaign of Caritas Europe. You will find all our materials and links to all the co-organisers of the campaign on their website: www.einemillionsterne.de

Has your national Caritas organised a similar initiative for Advent or the Christmas period? Caritas Internationalis currently has a special page on its website for its members’ Christmas initiatives. We would be grateful for any photos and information you can send us about your projects.