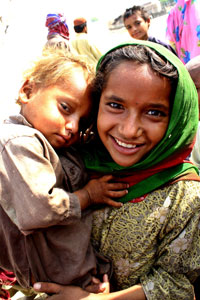 “There is still a lot to be done,” said Bishop Joseph Coutts, President of Caritas Pakistan. “We are now moving from the early relief stage to reconstruction. In some regions however, especially in the south, people are still lacking the most basic things like food and clean water.”

Caritas members have allocated more than $20 million to the flood response so far.

“Thousands of families in the areas most affected by the floods are now in homes and have been able to plant in time for the wheat season, which will provide them and their families an income at harvest time,” said Jack Byrne, Country Representative of Catholic Relief Services (CRS is a Caritas member).

The floods in Pakistan started in late August and covered large areas of the country in the Khyber Pakhtunkhwa, Sindh, Punjab and Balochistan regions.

As the floods progressed, disaster grew until almost one fifth of the country was under water. Around 170,000 displaced people are still living in camps today. In some areas, the water has not receded.

Reaching affected people was a challenge in itself. The country’s infrastructure was heavily damaged and some communities are situated in mountainous and isolated areas. Caritas evacuated 50,000 people from flood risk areas in Sindh.

Hospitals and health centres were damaged and made it difficult for people to get treatment. Caritas gave medical consultations or treatment to over 88,000 flood victims. 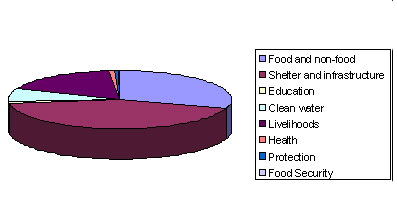 As floodwaters receded, there was an increased fear that communities would suffer from cholera and other water-borne diseases. Caritas distributed hygiene kits and water purification tablets to almost 20,000 families and trained 2,300 people on good hygiene. Caritas will build large water purification plants that can serve entire villages.

As close to two million houses were damaged or washed away by the floods, shelter had to be provided quickly to protect flood victims before winter. More than a third of the overall budget, roughly $8.6 million, has been allocated to emergency shelter material and the reconstruction of homes. Around 40,000 people received emergency shelter materials such as tents, tarpaulins or semi-permanent housing.

More than 130 community infrastructure projects such as the reconstruction of roads, irrigation channels, have also been completed. Child-friendly places were provided for 3,600 children and around 14,000 families received livelihood support from Caritas through the distribution of seeds, vaccination of livestock.