Hope for a home after Pakistan floods 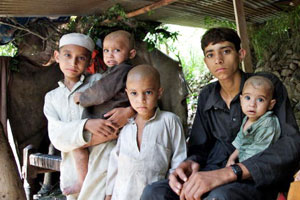 Sher Ali, 14 years old, is sitting with his brothers in a temporary shelter he made after his house washed away due to flood in Shangla district in Khyber Pakhtunkhwa province of Pakistan.
Credits: Asad Zaidi/CRS

Caritas Pakistan will support the construction of 2500 shelters for people displaced by super floods that swept away homes and crops in the Sindh province last year.

“Restoration of basic infrastructure is crucial in returning life back to normal. Months of standing water has exposed the wooden skeleton at the base of the remaining mud houses”, said Shamas Shamaun, Executive Secretary of Caritas Pakistan in Hyderabad dioceses.

He was speaking on a visit to the villages in the northern coastal areas of the Sindh province on 25 January. Caritas Pakistan will provide construction material to 1500 families in Karachi and 1000 families in rest of the province, home to the largest number of people made homeless by the floods six months ago.

The concept of semi-permanent houses is an innovation to the existing structures composed of wood beams and straw covered in mud.

Caritas Pakistan will monitor construction and hire pay the family for the labour on their own homes. Each house will be 168 square feet and cost around 60,000 rupees (US$ 698) including material for a traditional shed based on a four feet concrete boundary and the labor involved.

“It will give them financial help as well as sense of ownership. Plus the cement base will lessen the damages in this disaster prone area”, Shamaun added.

Some 166,000 people are still displaced six months after devastating floods first hit the country. About 2000 died while 1.7 million houses were damaged after one-fifth of the country’s total land area went underwater last July.

According to its interim report, Caritas Pakistan had appealed for 1571653 Euros out of which 661988 Euros had been spent till last Oct.

Wali Muhammad, one of the beneficiaries in the worst hit Sindh province, stayed in a tent village for two months. After losing six acres of sugar cane and rice, the former farmer now catches fish at the newly sprung water ponds on his irrigation land.

“Only one room was useable after two weeks of cleaning. Manual labour is the only other option of income till the next crop ripens”, he said pointing to his damaged abode.