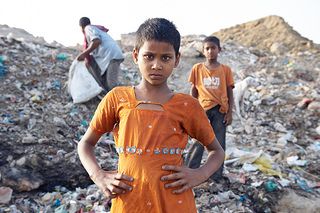 Children living off the rubbish heaps in the slums of India. Andreas Schwaiger/Caritas Switzerland.

Millions of people around the world are struggling to cope with rising food prices say Caritas staff.

“The price rises in India usually affect the poorest people, but they are now so steep that the middle class is hit hard as well,” said Sunil Simon, in charge of natural resource management at Caritas India.

The FAO (the UN’s Food and Agriculture Organisation) food price index has surpassed the level it reached during the major food riots of 2008. After a year of steady increases, the index reached 214,7 points in December, compared to 206 points in November.

What worries Caritas experts is that the index exceeded the level it had attained in 2008, a year of severe food crises and food riots in many developing countries. As one out of six people in the world already suffer from hunger, rising food prices make it even more difficult for poor people to buy food.

“Caritas is deeply concerned because increases in food prices affect the poorest consumers the most since they spend the largest proportion of their income on food. The present crisis reveals again how vulnerable the poor are to food price volatility.” said Christine Campeau, Climate Change and Food Security Advisor for Caritas Internationalis.

Onion prices in Delhi have more than tripled over the last months.

“These price increases are partly due to distorted market conditions and market failure,” said Sunil Simon.”There are too many middlemen controlling the markets. Demand is not properly planned and there are problems of corruption and transparency. The poor don’t have any chances to get out of their difficult situation. They are very vulnerable to the negative consequences of climate change on production and to international price fluctuations caused by speculation or natural disasters.

“In India, we are particularly concerned with the small farmers’ conditions since a series of suicides in 2007. Their case illustrates very well the desperate situation of the most vulnerable populations. Farmers couldn’t get out of their production more than they put in most seasons. Being too poor or already indebted, they could not get loans at banks and had to rely on money lenders charging them very high interests.”

Caritas India set up programmes to support farmers in the most vulnerable regions in central and southern India. Caritas helps them cope with problems such as droughts and crop failure, teaches them more efficient agricultural techniques and helps them plan their finances so as not to depend on money lenders. Activities are carried out at a local community-based level directly with the most vulnerable people.

“We can’t unfortunately feed the whole country, India has so many people. We need to help people help themselves and provide them with opportunities to make a living by themselves,” said Sunil Simon.

In Algeria, riots against exploding prices for basic foods have left five people dead and more than 800 wounded at the beginning of January.

“The price explosion has lead to violent outbursts that show how difficult it is for the poor to cope,” said a representative of Caritas Algeria. “Young people from Bab El Oued, a poor neighbourhood in the suburbs of Algiers, have looted stores, put on fire cars and engaged in combat with police forces to express their rage.

“As in other North African countries, several people have set themselves on fire out of despair. The situation is very serious. There is a total lack of perspectives for a growing number people in our society”.

Caritas is working on food security and livelihoods in many countries, providing support for the most vulnerable populations through income-generating activities or agricultural programmes and advocating for the poorest rights within international organisations.