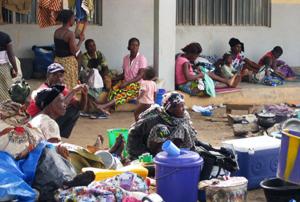 People fleeing the violence in Cote D’Ivoire have sought refuge in Bangolo, where they are receiving aid from Caritas.
Credits: Caritas Cote D’Ivoire

Caritas is appealing for over 300,000 euro to help people in Côte d’Ivoire who have been affected by December’s election violence.

“The greatest difficulties for those forced from their homes comes from not having enough food or health assistance,” said Jean Djoman, Director of Human Development at Caritas Côte d’Ivoire. He said that displaced people have difficulty accessing the usual health services.

“People have a whole range of health problems that need to be treated. These include malaria, stomach upsets, skin and lung problems, and then there are the women who are pregnant and who are giving birth without adequate healthcare.”

Violence erupted when President Laurent Gbagbo refused to stand down after losing the elections last November. Up to 300 people have been killed since then, mainly supporters of Alassane Ouattara, who was recognised as the winner of the elections.

People will receive food packages consisting of rice, beans, salt and oil and access to drinking water will be boosted. They will also receive household items which they may have lost in the unrest, such as cooking utensils, plates, cups, blankets and mats.

Caritas will monitor children’s health to ensure malnutrition doesn’t take hold and will provide vaccinations for babies and children up to the age of five.

Education initiatives will not only focus on children, but also on making adults aware of the risks of domestic violence in their current situation and also sexually transmitted diseases.

Traditionally, Côte d’Ivoire was considered one of the most stable countries in West Africa. But the current violence shows the ethnic, religious and economic divisions which lie under the surface of this apparent stability.