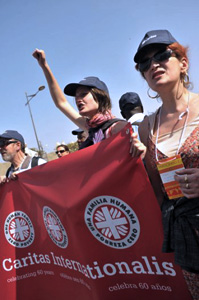 100 Caritas representatives from many countries march to the rhythm of the drums while heading towards the Cheikh Anta Diop University of Dakar where the 10th edition of the World Social Forum takes place. Credits: Elodie Perriot / Secours Catholique

Dakar, 2 pm: Under the burning sun, Sfax Place in the city centre is filling with crowds of marchers. African women dressed in colourful outfits dance to the rhythm of a tune that goes: “Solidarity with the women from all over the world”. Further down, Amnesty International shows a banner denouncing forced expulsion of people. “One human family, zero poverty”, members of Caritas Internationalis shout.

The 2011 the Word Social Forum began on 6 February with a march through the streets of the host city Dakar in the West African country of Senegal. Until 11 February, almost 70,000 people from all over the world will share their experiences and think about how to create a better world.

There are around 100 Caritas representatives from many countries. To the rhythm of the drums and slogans, they are heading towards the Cheikh Anta Diop University of Dakar where the 10th edition of the World Social Forum will take place. This symbolic march uniting people and communities from all over the world is the official opening of this huge event in favour of a different type of globalisation.

The World Social Forum brings together thousands of social movements from civil society. Associations, NGOs, trade unions, agricultural unions and so on, all have come to build a more just world.

“The values of capitalism are those of constant competition and battle for profit. Those are not fair values!” says Chico Witaker, cofounder of the event. “The WSF is not an organisation. It is not a movement with leaders but a free space where a certain number of civil society organisations get together to create, recognise each other, exchange, learn from each other, identify common grounds and act to change the world. A different world is possible. But what kind of world do we want to build?”

Migration will be the major focus of this WSF. Many associations will hold workshops on this subject but also on food sovereignty, democracy, access to water. The list goes on. On 8 and 9 February, Secours Catholique-Caritas France will look at restrictions on the free movement of people, the opportunities migration offers to the migrant and to the host country, migration in French Guyana and the control of arms, human trafficking and the extractive industries.

“Inspired by the Bible and the revelation of Jesus Christ , Catholic organisations need to make their voice heard at the WSF. They have a distinctive way of looking at people and therefore at humanity. As Christians, we have to make ourselves heard and in the same way, it is important for us to listen to what other religions and other philosophical conceptions have to say,” said Emmanuelle Lafont, Bishop of Cayenne in French Guyana who is collaborating with Secours Catholique-Caritas France on this event.

“By working together we can shake up the system of globalisation – a system where money rules and where people are less and less interested in others, a system which will lead to the brink of disaster.”