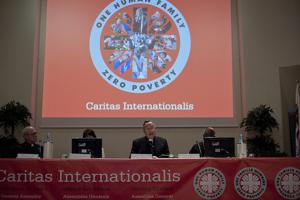 Cardinal Oscar Rodriguez Maradiaga SDB,President of Caritas Internationalis, has opened its General Assembly as the confederation of Catholic charities celebrate 60 years of service to the poor.

He welcomed 300 delegates from over 160 Caritas member organisations, including over 50 bishops, as well as representatives from the Holy See, international organisations, diplomats and other faith groups at an opening ceremony Sunday 22 May in Rome.

Cardinal Rodriguez told delegates, “Poverty is unacceptable as it affects the dignity and equality of the human person and thus the whole human family. One human family – zero poverty is more than just a slogan. It is the summary of our will to fight injustice and poverty. It is a simple expression of our understanding of the world.”

The Caritas Internationalis President outlined the aims of the General Assembly: to agree on how best to reduce poverty, “as an authentic expression of its common mission within the Church: to serve the poor”.

Cardinal Tarcisio Bertone SDB, Secretary of State for the Holy See, concelebrated the opening Mass. During his homliy, he praised Caritas for its work, particularly carried out in the last four years: “Particular gratitude is due for the work carried out in the aftermath of the recent natural disasters in Haiti and Japan, as well as for the ready assistance provided in emergencies resulting from conflicts like those in Côte d’Ivoire and in other situations of war, and from situations of extreme poverty.

“Amid all these painful realities, this worthy Church institution is called to demonstrate, practically andeffectively, that the world is one family, the family of the children of God: “One human family, zero poverty”, toecho the theme of the present Assembly.

“To reveal the faces of our brothers and sisters, to help Christians and all people of goodwill to care for their needs as if they were their own, and to demand the full recognition of their dignity: this is the fundamental commitment of Caritas Internationalis, as well as the goal of that renewed relationship with the agencies of the Holy See which I trust will be the result of the present Assembly.”

Cardinal Robert Sarah, President of the Pontifical Council Cor Unum also addressed the Caritas General Assembly Sunday. He called for the renewal of the Caritas confederation in a spirit similar to that of the Church during the Second Vatican Council.

The General Assembly comes at an important moment for Caritas Internationalis. The confederation’s Statutes and Rules are in the process of being renewed with the Holy See. Caritas delegates will also agree their strategic directions for the next four years, elect the Caritas Internationalis president, treasurer and secretary-general for the next four years and representatives for its board and executive committees.

Full texts of speeches are all online on www.caritas.org