How Caritas helped Myanmar after Nargis 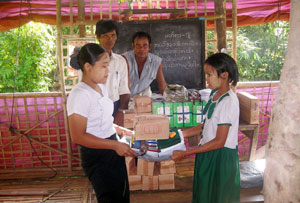 It was one of the deadliest cyclones in history. In May 2008, a storm powerful enough to blow away hundreds of thousands of houses hit Myanmar. Along with the resulting tidal surge it led to the deaths of 140,000 people.

One of the main problems for aid agencies wanting to help the people of Myanmar in the aftermath of Cyclone Nargis was gaining access to the flooded communities.

Caritas’s grassroots organisations along with the local Church were already there living as part of the communities that became isolated. This meant that they had not only easy access to assess people’s needs and deliver aid but their help was welcomed by villagers.

Jamie Isbister, who worked on the crisis for Caritas, said at the time, “Local church representatives enjoy a high level of trust among the affected population: they speak the local languages and dialects, have an intimate knowledge and thorough understanding of the fabric of local society, and are familiar with the social and economic environment in which they operate. Local Churches are simply part of the community, which greatly strengthens our response.”

The confederation response was immediate, not only from the staff on the ground, but also from member organisations across the globe. An US$8.2 million appeal was launched to get people through the first three months after the cyclone. The focus was on getting food, clean water, hygiene items and cooking utensils to around 45,000 people and shelter to around 20,000 people.

As the response geared up, member organisations from around the world offered not only money, but also staff and expertise.

Caritas Australia became a “facilitating partner”, acting as coordinator for the Caritas response for the three years after the cylone and providing personel to accompany the staff of Caritas Myanmar on their journey.

Speaking about the Caritas response, Archbishop Charles Bo of Yangon said, “Like good Samaritans many of you arrived within a week [… ]Your show of solidarity made us so strong, so integrated and so inspired [… ] You sent your best men and women, whose professional competence was matched by their inspiring sense of human compassion.”

Once the emergency was over, Caritas and the Church focused their efforts on supporting villagers in rebuilding their communities. This meant helping people get back to work, boosting educational opportunities, rebuilding infrastructure to improve transportation and trade and supporting communities in identifying weaknesses and preparing themselves for future disasters.

Over 4,100 people took part in cash-for-work programmes. Caritas, the Church and partners built or repaired 19 roads and 7 bridges and created 24 ponds which improved access to water for over 3,000 people.

“Today communities are stronger and better prepared should disaster strike again,” said Alistair Dutton, humanitarian director at Caritas Internationalis. “In three years of work, the confederation has supported the people of Myanmar to rebuild their homes and lives and get back to school and work. Cyclone Nargis was an opportunity for the confederation to come together as a family, to pool its resources and knowledge and to help the people of Myanmar face one of their most difficult challenges in recent history.”