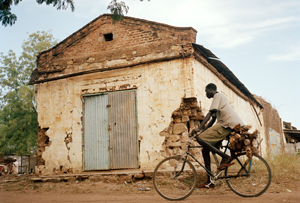 Caritas is warning against a return to war in Sudan, which ended in 2005 with the Comprehensive Peace Agreement.
Credits: Elodie Perriot/Secours Catholique

Over 60,000 people have been forced from their homes by fighting in South Kordofan, in the border region between north Sudan and soon to be formed Republic of South Sudan. Caritas fears a humanitarian crisis is rapidly developing due to the conflict and a lack of access to the affected population by the humanitarian community.

Coadjutor Bishop Michael Didi Adgum Mangoria of El Obeid, whose diocese covers the worst hit areas, says people have been fleeing from the fighting, trying to escape the conflict if they can.

Bishop Didi said, “The war must end immediately. There is great suffering among the people. The international community must do all it can to support a return to a negotiated peace settlement.”

More than 70 percent of the population of Kadugli has fled as the city has become engulfed in heavy fighting including aerial bombardment. Over 27,000 people from Kadugli have fled to Kauda, but aerial bombardment has been reported there too. An unknown number of people are believed to be hiding in the Nuba Mountains. Families looking after displaced people are running out of food as commercial supplies are disrupted. The onset of the rainy season will make reaching people even more difficult.

The humanitarian community in Kadugli is confined to the compound of the UN Mission in Sudan (UNMIS) due to the security situation. They are unable to reach the affected communities.

Reports indicate that after spending several days in the open with little or no food or water, the health of those fleeing the conflict is deteriorating. Reports of sectarian violence against civilians are inhibiting people returning to their homes. Caritas calls on all sides to protect civilians and any abuses must be investigated and the perpetrators brought to justice.

Bishop Didi said, “People have been running for their lives from their homes in Kadugli. Some have gone to villages, some to the UNMIS compound, some have arrived at the Sudan Aid (Caritas partner in Sudan) compound in El Obeid and those with the means have gone to more secure place, even as far as Khartoum. People have left their homes with nothing. There is an urgent need for food, medicine and shelter.”

Bishop Didi made an impassioned plea for the prayers of all people of all religions. He said, “It is vital to provide humanitarian aid, but just as important, we need everyone to give Sudan their prayers for peace.”

Caritas is promoting an international prayer campaign for Sudan and the future South Sudan.