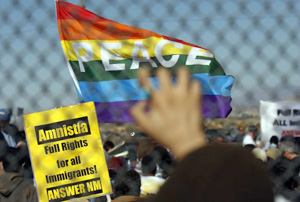 A man on the Mexican side holds onto the border fence separating Mexico and the U.S. as people hold a peace flag and signs on the U.S. Side, in Ciudad Juarez January 29, 2011. About 200 people gathered on both sides of the border, wishing for peace and an end to violence.
Credits: REUTERS/Gael Gonzalez courtesy of alertnet.org

By Fr. Francisco Gallardo, director of the Caritas migrant house at Matamoros, near Mexico’s border with the USA.

People leave their homes in search of the “American dream” but they end up coming to us looking for lodging, clothes and help.

Many of them arrive completely exhausted. There are people who’ve been kidnapped and who come to us full of fear. They’ve been tortured and abused and are in a pitiful state.

Most of those who come to us are men. There are very few women and children. Sometimes people come with children but they can’t prove they are their parents. We think that they’re taking the children to their real parents in the US.

We’ve been working with migrants in this diocese for the past 24 years. Originally, we opened our doors to migrants who came from the centre and the south of Mexico. But then the situation became more dramatic and people started to come from the Central and South America: from El Salvador, Honduras, Guatemala, Nicaragua, Panama, Costa Rica, Brazil and other countries.

Often attempts to migrate from the poverty of their country ends up the migrant being deported from the US. Those who are deported are usually in a very bad physical and mental state. Many times those deported are men. Their families are in the US along with relatives. The men wait along the Mexican border for their wives and children to join them.

For the children the chaos of the situation is very difficult. Sometimes they don’t even speak Spanish and have had no experience of their parents’ culture. Those who are deported sometimes try to get back into the US. They say to themselves, “ I’ll go back home and then I’ll come back again.”

In 2010 alone we helped 13,000 deported migrants. When they come to us, as well as needing food, clothes, shoes, medical help and psychological and legal guidance, they ask to use the phone and for money for their journey.

The migrants tell us terrifying stories of extortion and kidnapping. They tell us how they fall into the hands of criminal groups who involve them in crimes. The bands show them videos of how they kill people to show them what will be their “job”.

Just last year in San Fernando in our diocese the bodies of 72 Central American migrants were found. There was just one Ecuadoran who had survived and we at Caritas were able to offer him material and spiritual comfort after his ordeal.

Mass graves are just part of the reality of migration from Latin American to the US. Over the past few years, methods of migration have become more sophisticated but the maltreatment, kidnapping, extortion and the disappearance of migrants continue.