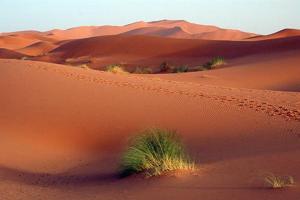 Like many countries in Africa, Algeria has not been spared by the effects of extreme or unseasonal weather. Known for its arid and semi-arid climate, the region is highly vulnerable to changes in climate. Over the last 50 years, an increase in extreme weather events has been observed.

Phenomena that bear witness to this change, which are recorded in climatological studies carried out by the National Meteorological Office, include an increasing frequency in torrential rainfall, especially in the high plateaus (e.g. Ghardaïa and Béchar in 2009–2010), that has caused flooding for the first time ever. By 2020, maximum daily rainfall may exceed the normal annual average in the south of the country.

Other extreme phenomena have occurred: cyclogenesis, drought, heat waves and sandstorms. Scientists have estimated that rainfall will decrease by around 20 percent in the coming years.

Experts from the ‘Hydro-meteorological Institute for Training and Research’ foresee a reduction in the rainy season and a rise in temperatures of around 1° to 1.5° by 2020, which would have fatal consequences for 30 percent of animal species. They also estimate that temperatures will rise a further 3°C by 2050 due to global warming.

The number of days of snowfall has decreased by 40 percent in several regions of Algeria, such as Tlemcen, Ouarsenis and Djurdjura. Another impact is the considerable rarefaction of water resources, high daytime and night-time temperatures and heat waves.

Terrestrial and marine flora and fauna have been significantly affected by this increase. The change is expressed through the rarefaction and/or the disappearance of some species to the detriment of others, desertification and pollution, resulting in degradation of the environment.

Other aspects of the effects of global warming on coastal areas of Algeria include high sea levels and harmful waves (stronger and more frequent storms in 1980, 1989, 1995 and 2001), causing erosion and even disappearance of beaches: e.g. the beaches west of Algiers, Bejaia Beach, Boumerdes and Oran. Such phenomena result in loss of beaches (e.g. West Beach in Sidi Fredj west of Algiers), and consequently a loss of eco-tourism and economic interest, saline intrusion (soil and groundwater salinisation) and flooding of low-lying coastal areas.

Algeria has been one of the first African countries to ratify all sections of international environmental protection agreements (including the Kyoto Protocol and the Barcelona Convention). However, their application and monitoring has been inadequate. For example, the Ministry of Regional Planning, the Environment and Tourism organises conferences and seminars almost every year to discuss environmental issues. Agreements, laws and plans are designated but their application is very limited in terms of space (usually only in the capital) and time.

Algeria is substantially involved in “global warming and environmental” issues on the political and economic fronts. However, the actions taken to remedy the situation are almost non-existent.

According to meteorological and environmental experts in Algeria, in the future it will be necessary to think about developing renewable sources of energy, public transport and insulation techniques in the construction sector, as well as setting up surveillance and warning systems for drought and heat waves in all vulnerable towns and cities. In my opinion, to achieve this it is necessary to begin by stepping up outreach and awareness-raising efforts regarding environmental protection, the fight against all forms of pollution, and establishment of a culture of protecting nature and its resources among citizens and decision makers.