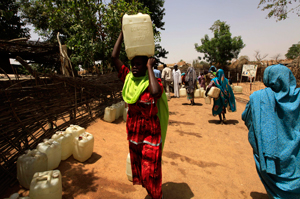 Life and hope for Fatima
Fatima is a 35-year-old mother of six and from the Fur tribe in Darfur. She fled her home in Jebel Marra in 2004 when fighting flared up in the area. Her father, husband, two brothers and her mother-in-law died in the conflict. Fatima headed to Nertiti, but they were attacked again before they arrived. Eventually they reached their destination, homeless and without hope. She received some food from people who already lived in the camp and she used her cloak to provide shelter for her children. Then the rains started and there was no one to look after them. She had never thought that this would one day have been her destiny. No shelter to protect her children from the sun, heat and rain. No a jerry can to bring water. She decided to go to Hassa Hissa camp in Zalingei where her relatives lived. Fatima said that in Hassa Hissa, she received a kit from Caritas partner NCA including plastic sheeting for shelter and a mat to sleep on, a jerry can for water and a kitchen set to cook with. 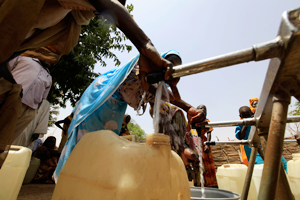 The only source of water for residents of Hilet-Hausa was an open hand dug well. It was about 1 km away from the main relief camp there. Most people could not get enough water because of the queuing and the long trek, especially for those without donkey carts. Caritas partners NCA joined forces with the community to ensure people had enough water. The community provided labour, sand and stones for construction, and Caritas partners began by drilling two hand pump powered boreholes in the area. There was still not enough water, so NCA upgraded the pumps to solar powered-systems that were handed over to the communities to run and maintain.

This is our water system and we shall maintain it even if NCA leaves this camp, it remains ours‖ — said one sheikh during discussions on benefits realised by community from the solar powered water point. 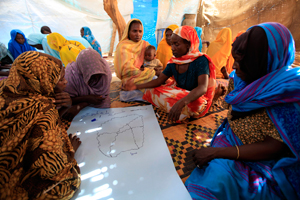 My name is Fathia, I have lived in Dereig camp since 2004 and I have five children. Previously I fled from Marla village when it came under attack. When we arrived at the camp, my husband left and has not returned.

I joined the Sudanaid (Caritas Sudan) community activities more than five years ago, and now I have a lot of experience. I was trained in tailoring, needle work and preparing food. Sudanaid also trained us in child rights, peacebuilding and on how to deal with our inner suffering and how to put a smile on the faces of those who are crying.

The community centre is like a home to us. It has given us an opportunity to earn a living with dignity. Every month I earn an average of 380 SDG from tailoring and needle work. Previously, there were lots of things which we did not know much about, but we now spend our leisure time by seeing our sons and daughters participating in open days, sporting activities, cultural events that take place periodically at the community centre and these are all things which make life in the camp easier for us. By coming together in the community centre, we forget our differences and help reduce each other’s suffering. During support group meetings with songs and dance, we are able to reduce stress. Sudanaid had helped us to have hope for a better future.

Food for Maryam and baby Najmeldin 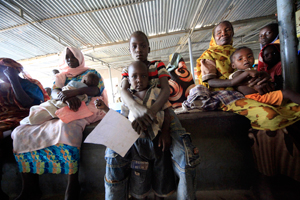 Maryam, a 27-year-old mother, is from Deyti Jary village, about two km from Zalingei. She was forced from her home and settled in Hamada camp with her seven-month-old child, Najmeldin, and her husband.

His father then refused to continue the follow up at the nutrition centre and considered it as a waste of time since his child was still suffering from malnutrition despite being so long in the hospital. The family had already accepted that death was now fate of their child.

The nutrition team explained to the father that proper management of malnutrition takes time. At first he refused to continue follow up at nutrition centre but after negotiations with the nutrition workers, he agreed that the mother could continue visiting the centre and receiving special rations.

After proper management by his mother and nutrition centre team for three consecutive months, Najmeldin gained average weight and started eating well. Now Najmeldin is a healthy child. He plays with other children in the camp.

His mother, Maryam has started community mobilisation around management of malnutrition. She is one of the very active community worker in Khamsadagaig camp and contributes to making a difference to the lives of others.