Fresh water on tap after the floods in Pakistan 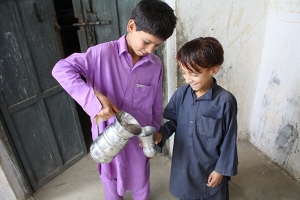 Throughout northern Pakistan, CRS repaired dozens of systems, bringing clean water to over 200,000 people hit by the flood.
Credits: CRS

On a day in September 2010, a group of white-bearded men left their mountaintop village in Pakistan and wended their way down 5000 feet of steep, rocky slopes. None of them were young; one used a cane. At the base of the mammoth mountain, a river had burst its banks and destroyed the only bridge leading where they needed to go. The men waited hours to make a precarious journey across the water on a hastily-constructed rope trolley—a tiny open crate that swung and wobbled each of them over the river.

After a difficult journey, the men finally reached their destination: a Catholic Relief Services (a US member of Caritas) office in the town of Besham. Getting from their village to Besham was normally a rough, bumpy two hours by car. But during the massive flooding of summer 2010, the journey took far longer.

The men were desperate to repair their village’s flood-destroyed water system, and had approached others with no success. They made the arduous trek because they knew CRS; it had built a school near their village and provided aid after an earthquake.

“CRS helped us before,” says Abdul Rahman, one of the group. “We hoped they would help us again.”

The men presented their case to CRS engineers, who came to the village and evaluated the damage. The water system had served not just their village, but a total of five thousand people. During torrential rains, says Muhammad Jan, another village elder, pipes were either washed away or damaged in landslides.

With the pipe system gone, “poor people, especially women, had to go for water and carry it two or three miles,” says villager Awal Khan. People collected rainwater from their roofs, and tried to store water in cisterns. Saving the hard-to-get water only for drinking and cooking, the villagers could not bathe or wash their clothes.

Finding that 9000 feet of the line was damaged, the CRS team took action. With funding from Caritas partners in Australia and Switzerland, it brought in pipes, cement and tools. The village men contributed their labour, agreeing to haul the pipes and machinery on terrain too rough for cars to navigate.

“We carried over 60 pounds of pipes for five hours,” remembers Awal Khan. “The tops of our shoulders got red and swollen.”

“We really needed the water system to work. Our women and children were suffering,” he continues.

Today, the lines are restored and water flows from tapstands within easy reach of villagers’ homes.

Throughout northern Pakistan, CRS repaired dozens of systems, bringing clean water to over 200,000 people hit by the flood. “We felt happy. Our problem was solved,” says Awal Khan.

“Our women were so happy to be able to get water in their own communities and not by carrying it in a pot on their heads,” he continues. “And our children are clean now.”

“We’re poor. We know how precious water is,” says Muhammad Jan. The villagers take care not to waste a drop.

Stooping over his cane, an elder named Haji Sawal Fakir looks on as village boys drink water from a tapstand. “We had a lot of problems after the flood,” he says. “God had mercy on us that you came here and responded to our intense need.”