Hunger in Kenya and how to stop it 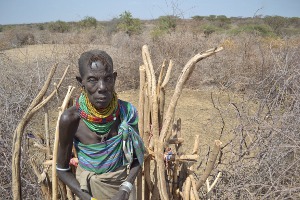 The land is barren, the animals are dead, the people are starving. This is one face of northern Kenya in July 2011.

“The famine started last year,” says Ellela from the village of Lokitaung. “There were no rains last year or this year. We have had drought for two years. If there are no people with the good heart to help us we will die.”

On a recent trip to Kenya, Eoghan Rice from Trócaire (Caritas Ireland) reported seeing malnourished children waiting at clinics for emergency treatment, adults who were just skin and bone and the carcasses of livestock littering the scorched and lifeless ground.

“I have not had a proper meal in seven days,” said Locheramoe Kuwom. “I had nothing yesterday except for tea. The day before I had a bit of palm fruit. There is a lot of hunger here. If this situation goes on, most of the people who live here will die,” he said.

The drought in East Africa is said to be the worst in 60 years. As a result, over 10 million people in Kenya, Somali, Ethiopia and Djibouti need help.

Eoghan visited the Kerio river. It had dried up in 2010 and was now just a long stretch of sand. He said people were digging holes along the river bed to find the last drops of water. Others walked ten miles to the nearest water source, which was often dirt-coloured and unfit for human consumption.

“I had 150 goats before but the drought finished them,” said Andrew Lodio, from Lokitaung. “I have only five left, but they will also die soon. The goats are very weak. The future is bleak unless some people come to help us. There have been droughts here before but never like this one.”

With the animals and crops dead or dying, people resort to the most desperate measures to fill their stomachs, sometimes relying on bits of tree bark and wild berries.

Some people try to survive making charcoal from the dying trees which they can sell at the local market. However, demand is low and very little money can be made.

And yet, there is more to northern Kenya than drought and the battle to survive. On a trip Nakwalekwi, Eoghan visits a Caritas Ireland project which consists of a windmill powering an irrigation system. The results are astonishing. The sandy land is lush with vegetation. The land produces crops such as maize, soghum, green grams, cow peas, sugar cane, bananas and oranges, all year round.

The project shows that the face of East Africa doesn’t have to be one of dependency, drought and desperation. With the right projects communities can produce their own food and lead a less precarious life.