Pakistan floods one year on 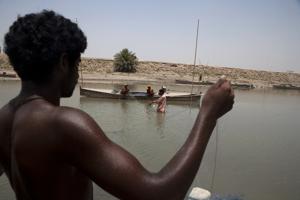 Water can be your best friend or worst foe – as last year’s devastating floods in Pakistan showed.
Credits: Trocaire

Pakistan had seen nothing like it in 80 years when monsoon rains swept across the country in the summer of 2010. The subsequent floods affected 18 million people and put one-fifth of the country under water. People lost their homes and possessions, livelihoods and in some cases their lives.

One year on, Caritas has helped rebuild lives and communities by providing food, water, shelter, medical assistance, counselling and provided them with many of the items they lost in the floods. The focus is on rebuilding lives whereas in the early months Caritas worked hard to respond to the immediate emergency.

Caritas Pakistan immediately sent assessment teams to some of the worst affected areas. The disaster had hit hard in the Khyber Pakhtunkhwa, Sindh, Punjab and Balochistan provinces. Bishops in dioceses in these areas accompanied assessment teams to bring hope and to use the Church network to provide aid as quickly as possible.

Caritas Internationalis helped coordinate efforts, sent out emergency experts to give support and launched an emergency appeal for A US$5.5 million (4.3 million euro). Once the true scale of the disaster was known, this figure was doubled. Caritas spent over US$10.6 million (7.5 million euro) in the first five months alone.

The aim was to reach people as quickly as possible in the immediate period after the disaster. The floods meant many places weren’t accessible by car or truck so Caritas sometimes used donkeys and staff sometimes found themselves wading through floodwaters and mud.

Over 2 million hectares of crops were lost, markets flooded out and transport difficult, the flood survivors faced the daily challenge of finding enough to eat. Caritas started to give out food packages containing rice, flour, pulses, powdered milk, ghee, spices, sugar and tea.

Water was everywhere yet not drinkable because it was contaminated with sewage and disease. Water pipes had been washed away and wells flooded out. Caritas gave out jerry cans and water purification cans following the floods so people had drinking and cooking water. It provided emergency sanitation in the form of latrines to help avoid a public health crisis.

When their homes were washed away, many people sought shelter in public buildings or with friends and relatives. Caritas gave out tents and built insulated shelters which would help alleviate the overcrowding.

Caritas also set up over 400 mobile health clinics which treated 70,000 people in the first five months after the disaster. Trained medical staff treated people for ailments brought on by the floods such as stomach upsets, chest infections and skin conditions. They ensured that people continued treatment for long-term illnesses such as diabetes, they provided immunisations and helped keep at bay the malnutrition which goes hand-in-hand with disasters where the amount of nutritious food available is limited.

Further help was given to help recuperate some of what flood survivors had lost. This included distributions of clothes, bedding, kitchen utensils and hygiene items.

Caritas helped rebuild water systems and developed projects so farmers could get back to rearing cattle and growing food. Cash-for-work projects encouraged communities to rebuild infrastructure so markets could be accessed and could work efficiently.

Counselling was provided to help people overcome the trauma of the disaster and a particular focus was put on protecting women so they could have safe places and access to support at such a vulnerable time.

Caritas is now focusing on supporting Pakistanis in repairing the damage the floods did to their lives. This means accompanying them in rebuilding their communities through construction and farming and activities which will see people returning to work. Investment in the future is made by helping people acquire useful skills and through projects to plant trees, which will help prevent landslides and such devastation in future floods.

Flood anniversary and the role of Caritas Pakistan