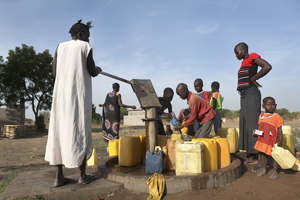 Decades of North-South conflict in Sudan came to an end in 2005 with the signing of the Comprehensive Peace Agreement (CPA). One of the most important CPA provisions was a referendum on possible secession of the South. The referendum took place in January 2011, and the overwhelming majority of southerners (99%) voted for independence. The secession process will be finalised on the 9 July 2011, when new Republic of South Sudan will be officially declared.

What will be the main challenges?

Civil war in Sudan took more than two million lives and caused displacement of around five million people. This prevented any progress to take place, infrastructure is severely underdeveloped and access to any services (health, education and water and sanitation) is extremely limited.

The situation is particularly dire in the South. As the newly emergent Republic of South Sudan looks to its future, the challenges are great. Half of the population lives below the poverty line and the infrastructure to meet their needs does not exist.

What is the role of the Catholic Church?

During the long conflict, the Church of Sudan was often the only provider of assistance and health and education services to the population. For much of the last three decades the Church has been the single institution with infrastructure on the ground among the people all over the south. The Church has been actively involved in promoting and undertaking peace and conflict resolution activities too.

The Church is determined to play a leading role within Sudanese civil society in supporting the democratic process, promoting reconciliation and peace and offering humanitarian and development services.

What does Caritas plan to do?

Caritas members working side-by-side with national and diocesan Church partners have launched a joint coordinated programme to provide basic needs to vulnerable people. The programme also includes developing local Church institutions so they can continue the work into the future. Caritas is also supporting local peacebuilding, preparing for future emergencies and backing a global prayer campaign.