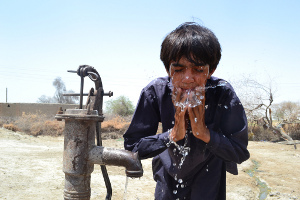 The fishing communities who survive on the produce of Manchar Lake in Sindh, Pakistan could never have imagined that the source of their livelihoods would one day destroy everything they owned. The lake is the biggest in Pakistan and has sustained generations of their families, with 20,000 people currently dependent on it for their survival.

Yet, last summer, the lake wiped away everything they had worked so hard to build-up. Encouraged by the onrushing rivers and tributaries which feed into it, Manchar Lake rose up and swallowed the villages that surround it.

Thankfully for the people who live there, Trócaire (Caritas Ireland) and the Pakistani Fisherfolk Forum (PFF), a nationwide organisation representing the needs of fishing communities, had piloted an emergency preparedness programme in the communities. Fearing the onset of flooding, the programme equipped the communities with loudspeakers, radios and a colour-coded flag system to warn when water was reaching dangerous levels.

The timing of the pilot project could not have been better – just three months later, Pakistan experienced the worst flooding in its history, with 20 million people across the country forced to abandon their homes.

Trócaire and the PFF moved quickly to rescue people stranded by the rising waters. Over 300 boats were deployed to bring people to safety, while transport was arranged to help affected communities move to higher land. With the help of money donated from the Irish public, the PFF rescued over 200,000 people – more than any other organisation with the exception of the Pakistani army.

Chuttan Hussein from one of the small communities around the lake said, “The PFF and Trócaire arranged for us to be evacuated and we moved to higher ground for three months. We were provided with shelter and food until it was safe to return home. We are so thankful for the support we received because without it we would have died. When we returned we discovered that we had lost all our equipment. Our boats and our nets were very badly damaged, which left us with no source of income or food. Life is very difficult now.”

Having moved from the ‘relief’ to ‘recovery’ stage of the operation, Trócaire is now focusing on rebuilding lives. Over the next twelve months, it will help 126,000 people to begin farming and fishing again, through the rehabilitation of infrastructure and equipment, as well as the distribution of seed and fertiliser.

Trocaire’s involvement with the communities of Manchar Lake runs deeper than the issues brought about by the floods, however. It is supporting the PFF’s attempts to lobby the Pakistani government to construct a water treatment plant which could rescue these communities from disaster.

For the last 15 years, pollution from upstream has slowly destroyed the lake, killing fish stocks and reducing the size of the fish that remain. The pollution has had a very serious effect on the people there.

“Life was very tough even before the floods,” says Chuttan. “We are a fishing community so water is the source of our livelihood, but the water here is badly contaminated. Fishing is our only source of income but pollution has led to there being less fish and smaller fish. We are very poor. We have no basic facilities, such as education or health.

“The situation here is getting worse but we have nowhere to go. We are begging the government to bring us fresh water. Sometimes, if we have some money, we can get drinking water from one of the bigger villages but mostly we have to use the water from the lake, which is making us sick. The lake water is now so contaminated that children are developing skin problems and fevers from drinking it. It is getting worse and worse all the time.”