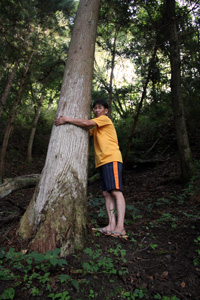 During the tsunami, Sakuma Kaname held on to this tree to survive, floating in water eight metres above the ground.
Credits: Sheahen/Caritas

Sakuma Kaname has taken the word “treehugger” to a whole new level. A high level.

When a mammoth tsunami struck his town in Japan in March 2011, Sakuma “was on a hill near a bay,” he says. “I saw the water rising so fast—not just coming in, but rising up.” In minutes, Sakuma was swimming—in a forest.

“There was a big tree,” he remembers. “I grabbed on to it. I was eight metres high.” Hanging on to the trunk, almost near the crown of the tall tree, Sakuma held on for several minutes.

Sakuma could let go of the tree—noting a nearby stone so he’d remember it—but he couldn’t go home. Water was still engulfing the lowlands near his hill. “On that hill there was a house,” he says. “I broke the window and went in.” Sakuma stayed in the stranger’s house overnight as strong aftershocks hit the region. “There was a big grandfather clock in that house, and it kept clanging because of the aftershocks. I was so scared.”

Days later, Sakuma finally saw what became of his apartment: it was destroyed. “When I saw it, I thought, ‘I’m alive. Life is the most important thing.’”

Thousands of people in Sakuma’s town, Kamaishi, suffered intense trauma while escaping the tsunami. They also lost their homes. In the year since the catastrophe, Caritas Japan has helped them not only with emergency needs like hot water, but also with moral support.

Mobilizing over 2000 volunteers, Caritas Japan cleared massive amounts of debris from homes in areas the tsunami devastated. Though Caritas’ on-the-ground operations within Japan had been relatively small before the disaster, its efforts in tsunami areas earned it a reputation for hard work and compassion. Caritas volunteers helped small businesspeople reopen their shops and repaired fishing equipment in a region heavily dependent on seafood. Caritas also ran soup kitchens, reconstructed schools and an elder care centre, supported people with disabilities in the tsunami area, and distributed heaters when winter came.

But most of all, Caritas became a shoulder to lean on. Volunteers staff makeshift “cafes” in church basements and temporary housing lots, listening as survivors tell their stories and mourn their dead. “Many older people come to the cafe. They are pessimistic,” says Sakuma. “But after visiting the cafe, there are many smiles.”

Sakuma still struggles with his tsunami memories. “Sometimes I can’t sleep,” he says. But Caritas volunteers have helped him deal with some of the trauma. He went back to the hill—“the man who owned the house is glad I was safe there”—and found the tree with the stone next to it. He grins as he shows visitors how high up he was on that day in March.

A year after survivors saw their world swept away, Caritas has comforted and supported thousands of people like Sakuma. Father Toru Funayama, a priest in Kamaishi, has seen the changes in Sakuma: “He is starting to smile again.”

Laura Sheahen is a Communications Officer for Caritas Internationalis.